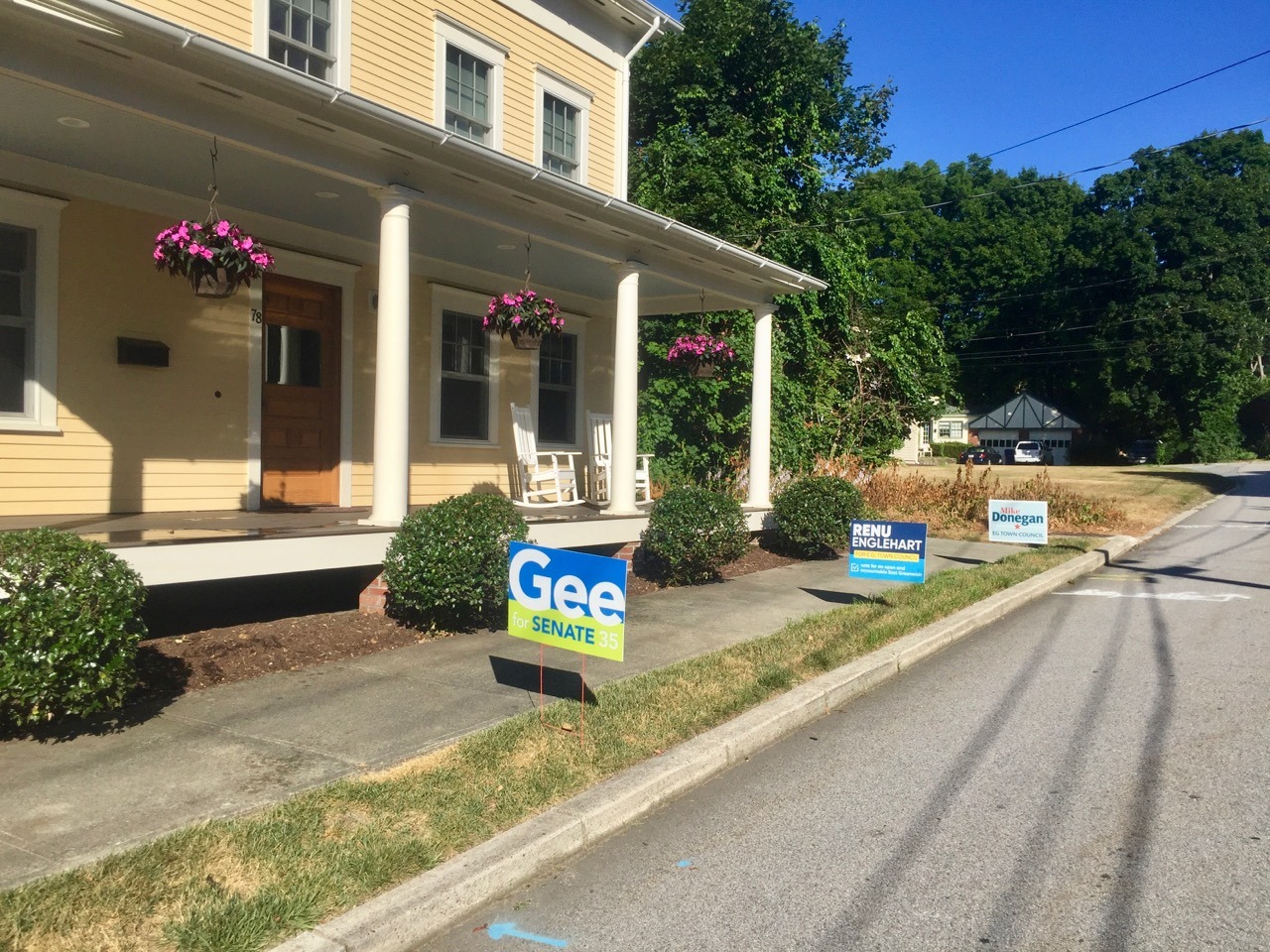 Some old timers say people didn’t use to put up political signs in East Greenwich. But with the recognition – thanks to a push from the ALCU a few years back – that political signs are a constitutionally protected form of free speech, they are now be found all over town.

But they don’t always stay put.

According to Town Council candidate Mike Donegan, as many as 50 of his signs have gone missing since he first started handing them out to residents several weeks ago. That’s out of around 150 of his signs total.

While his losses appear to be the greatest, others have also had signs disappear, including Renu Englehart (a Democrat), also running for Town Council, who’s seen 9 or 10 of her 40 or so signs get taken. And Sean O’Leary, unaffiliated, has had about 10 of his signs disappear, out of around 70 that have gone up.

Some of those missing signs have been returned. A couple of weeks ago, a bunch of the pilfered signs turned up on a grassy median in the Westwood Farms neighborhood off Division Street (above).

Most of the missing signs, however, have not been returned. Donegan and Englehart have reported the missing signs to police. Police Chief Steven Brown said in an interview he doesn’t think there have been more signs missing than in years past.

Dana Gee, the Republican candidate for Senate Dist. 35, said she hasn’t distributed many signs yet, waiting until after the primary. This is her first run for office but as campaign manager in previous campaigns for her husband, Mark, the current Dist. 35 senator, she said they’d only ever lost one sign.

“The trick is to put the address on the sign in Sharpie,” she said.

Building inspector Ernie Marinaro said he had not received any complaints so far about signs. Signs placed on public property, in front of schools, parks and and median strips, are not allowed. Typically, someone from the EGPD or the public works department will collect such signs.

According to the East Greenwich sign ordinance – which was revised in 2014 after a complaint from the ACLU – all signs political and otherwise, can only stay up for 120 days. The ACLU’s Steve Brown (no relation to police chief Brown) said that’s still unconstitutional, that residents have a right to have a political sign on their property for as long as they want.

But with other communities such as Narragansett with even tighter time restrictions (60 days there), it’s the ACLU may not weigh in on East Greenwich specifically unless someone is cited for flouting the 120-day limit.