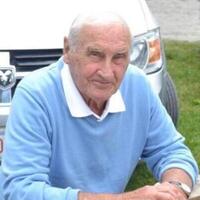 Born in Newport the son of Charles R. & Cecelia (Cappuccilli) Stafford. He lived in Warwick for 50 years before moving to E.G in 1979. Mr. Stafford graduated from Aldrich High School and the University of Rhode Island. He served in the US Navy during World War II.

He was the manager of general accounting for the America Hoescht Chemical company for 20 years. He became very active managing CYO baseball and basketball teams. His cadet baseball team won the state championship on two occasions. He was selected Warwick CYO of Man of the Year in 1962. He was a lifelong honorary member of the Warwick Council Knights of Columbus. He was also an avid golfer, a member of the Exeter Country Club for many years where he served as a president of the Men’s Club for 10 years.

Relatives and friends are invited to attend a Mass of Christian Burial on Saturday, July 11, at 10 a.m. at Our Lady of Mercy Church 65 Third St., East Greenwich. Burial with military honors will be private.