Suzanne Owren Carcieri, 76, of East Greenwich, former First Lady of Rhode Island, passed away on Thursday, November 15, surrounded by her loving family. She was the beloved wife of former Governor Donald L. Carcieri. They were married 53 years.

Born in Providence, daughter of Ivar and Patricia Owren, she graduated from East Greenwich High School and was the first Miss East Greenwich and runner-up for Miss Rhode lsland in 1960. She attended the University of Rhode Island, where she received the university’s first biology degree. In her adulthood, she went on to receive a master’s degree in health education at Rhode Island College. She was a beloved middle-school teacher at both Immaculate Conception School in Kingston, Jamaica and Our Lady of Mercy Parish School in East Greenwich. She was the First Lady of the State of Rhode Island from 2003 to 2011. 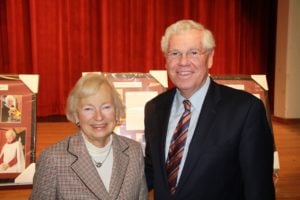 Sue and Don Carcieri at the 2015 EGHS Wall of Honor ceremony. Sue was inducted that year.

She will long be remembered and adored for her love, kindness, generosity, intelligence, and wit.  She was gracious to all, passionate in her advocacy, and deeply devoted to family and friends. She found pure joy surrounded by her grandchildren in the revelry of summertime fun and once said, “I really am mostly a mother, a grandmother and a wife.”

She was a devout Roman Catholic and a member of Our Lady of Mercy Church and was dedicated to many causes, including Missionaries of the Poor and Mustard Seed Communities.  As First Lady, she led a statewide wellness initiative and convened a task force for the prevention of substance abuse. She created the annual “Governor’s Best” juried art show, conceived a popular intrastate tourism initiative (“Rhode Islanders Touring Rhode Island”) and inaugurated and chaired six “Celebrate Rhode Island” balls benefiting the Good Neighbor Energy Fund.  She received honorary awards from her high school, college, and the American Heart Association. She was passionate about education and promoted achievement by youth in science, and each year presented an award in her name to the middle school winner of the State’s science fair at an annual State House event.

Governor Carcieri expressed his appreciation to all those who have extended condolences, saying, “Thank you for the outpouring of thoughts and prayers for Sue and for all of us, and a special thanks to Governor Raimondo and First Gentleman Moffit. Sue was my life partner and best friend, my most trusted advisor, and the heart and soul of our family.”