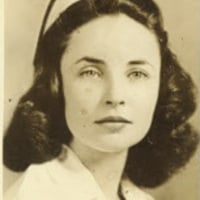 She was born February 24, 1925, the only child of the late Wallace and Gertrude (Cannon) Burns and was raised in the Elmhurst section of Providence. She attended St. Pius V Elementary School and St. Xavier High School in Providence. Marilyn attended Pembroke College and took great pride in graduating from the Forsyth Institute of Boston. For several years, she was a dental hygienist in the office of her uncle, Charles Cannon, in Providence.

In 1949, she married John, her high school sweetheart, WWII veteran and career military officer. Thus began a lifelong odyssey taking her from her hometown to postwar Berlin, Trieste, Italy, and stateside assignments in Florida, Pennsylvania, Georgia, Missouri and to the Pentagon, where he served on the Joint Chiefs of Staff of the U.S. Military.  In 1978, she returned home, where John served as Adjutant General of the Rhode Island National Guard. At each post, she was the model military wife, frequently advising other army wives on protocol and providing them a shoulder to lean on in coping with military life. Her support was integral to her husband’s success and her love for him was abiding.

During this journey, she was the devoted mother to sons John and Kevin and her daughter, Sara, navigating their schooling, sports, dance lessons, Boy and Girl Scouts, teen years in high school, young adulthood in college and guiding them as spouses and parents.

In retirement, she was known as Nana, mother- in-law to Sarah Kiely, Kevin O’Hare and Kim Kiely, and a doting and ever-present grandmother to Matthew, Danny, Emma and Liam Kiely and Thomas O’Hare.

Her Catholic faith was the bulwark of her life, sustaining her after the death of her father in her childhood. She was instructed in the faith at St. Pius V in Providence and was a communicant at Our Lady of Mercy Catholic Church, in EG for over 40 years. Her rosaries and prayer books were a constant, whether at her bedside or in her purse.

Marilyn was the companion and confidante of countless friends in Providence, Northern Virginia and every Army posting. She enjoyed keeping in touch and visiting with them over the years. Both she and John took the fullest advantage of their “golden years” enjoying frequent trips to Europe, returning with remembrances for their grandchildren and most importantly, more stories of her adventures.

She was a fixture at Bonnet Shores, Narragansett for over fifty years.  Marilyn was part historian, part folklorist and part broadcaster to all in the beach community.  She was regarded fondly and will be missed by all there.

In later years, she became an avid fan of the New England Patriots and Providence College Friars, her neighborhood team. Marilyn was a renowned low stakes sports gambler who closed her account with a two dollar profit at her son in law’s expense.

A Mass of Christian Burial will be celebrated Tuesday, June 14 at 11:00 a.m. at Our Lady of Mercy Church in East Greenwich. Visitation prior to the Mass will be held from 9:30 to 10:30 a.m. at the Hill Funeral Home in East Greenwich. Internment at Arlington National Cemetery in Arlington,Virginia will occur at a later date. In lieu of flowers, her grandson, Daniel Kiely, requests that donations to the Tragedy Assistance Program for Survivors (TAPS) may be made in her name.