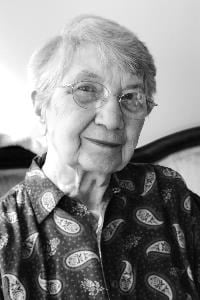 For most of her life Margaret was an active, engaged woman. She was a teacher, singer, artist, hiker, gardener, canoeist, world traveler, and more. Margaret was born in Conowingo, Maryland in 1928, where her father was working on the dam that would subsequently flood the town; for the next 12 years or so, her family moved all over the southeastern United States following other construction projects. They finally wound up in Rhode Island around 1940, where her father worked as a construction superintendent for the building of Quonset Point Naval Air Station. Margaret was Salutatorian of her graduating class from East Greenwich Academy, then went on to the Rhode Island School of Design, eventually earning undergraduate and graduate degrees in Fine Arts and Education, which included coursework at Brown and Columbia Universities. Education was extremely important to Margaret, and she always supported her own daughters’ educational experiences, from summer camp and summer school (in art and marine science) to study abroad programs in New Zealand, France and Germany.

After retirement from the Cranston School Department where she taught elementary art for nearly 30 years, Margaret dove into volunteerism, with the International House coaching recent immigrants on daily living activities such as how to navigate the public transit system, library, etc.; the Rhode Island Wild Plant Society (RIWPS), as programs coordinator, setting up bus trips, speakers, etc.; Memorial Hospital in Pawtucket, helping with filing until she annoyed her supervisor by suggesting a “better” filing method; and the Cranston Historical Society where she sometimes just went to prune the bushes or wash the windows. According to one of her longtime friends, “there was nothing she wouldn’t try or do for other people and organizations and causes she supported. I used to joke with her about being able to converse with a telephone pole!” Indeed, Margaret never hesitated to strike up conversations with strangers, a reflection of her curiosity about the world. In the days before – and even during – Internet and Google Search capabilities, if a word or topic arose–often from something she heard on the ever-present radio that she was curious about, Margaret would first consult the dictionaries and encyclopedias she kept at hand, and if those failed, she would call the local library.

Another important piece of Margaret’s life was singing with the Peloquin Chorale at the Cathedral of Saints Peter and Paul in Providence, as well as nationally and internationally, most notably in Rome. Their performances were frequently on national television. From daughter Alane: “One time my sister Hilary and I were sitting close to the front of the church during a televised performance. My sister was a perfect angel while I was fidgeting. My uncle from Texas watched the event on television. The camera focused on us at one point. We loved midnight mass at the Cathedral because afterwards we’d gather with the chorale members downstairs in the church and drink cold duck. Then we’d head home and open our presents at 2 a.m. We always received gifts from our ‘aunts’ in the chorale.” In her later years, Margaret enjoyed listening to recordings of the Peloquin Chorale, some of which are available on YouTube, although toward the end she said sadly that she couldn’t remember singing.

Margaret was an amazing artist. She minored in Ceramics at RISD and taught Ceramics classes on Saturdays at Rhode Island College and summer school at Cranston High School East, for many years. She was also the Arts and Crafts teacher for several years at Cragged Mountain Farm Camp in Freedom, New Hampshire. Margaret took evening classes at RISD in stained glass, and watercolor classes at the Newport Art Museum with Natalie Pfanstiel. She sold several of her original paintings, but often gave framed copies or originals as gifts. Many of these paintings were at least started on the various painting trips abroad that she took with Natalie’s group–to Cornwall, Nice, St. Lucia, Seville and Sicily, to name a few–but also closer to home such as Block Island, Gilbert Stuart Birthplace, and Roger Williams Park. Besides painting in situ or from photographs she took, Margaret loved to collect photos from magazines and calendars that she thought would make good subjects for future paintings. Margaret’s skill and willingness to put her talents to work were unmatched–she did the artwork for several of the Peloquin Chorale’s album covers, line drawings for a RIWPS coloring book and posters for Cranston Historical Society events, to name a few examples.

Last but not least, Maggie loved her “pretty house” and yard in Cranston where she lived until she moved into the Village at Waterman Lake in 2013. Neighbors often stopped by to chat with her as she worked out in her yard, planting, weeding, raking and pruning. Her gardens were filled with native wild plants and ornamental trees and shrubs. Many of her plants came from RIWPS plant sales, as well as botanical gardens throughout the Northeast.

Margaret is survived by two daughters and their husbands, Alane Margaret Downes of Harpswell, Maine (Bill Fall) and Hilary Downes Fortune of Foster, RI (Bill Fortune), as well as three grandchildren and their partners: Henry Fall of Mesa, Arizona (Dana Finkelstein); Isabelle “Belle” Fall of Westbrook, Maine (Ben Thompson); and Rowan Fortune of Foster, RI (Zane Lewis). Margaret was preceded in death by her two brothers, Jim and Paul Cheever, and two sisters, Virginia and Sarah Cheever; she is survived by an elder sister, Marion Helwig, and numerous nieces and nephews. Margaret’s ashes will be interred in St. Patrick’s Cemetery in EG, close to her parents’ gravesite, in the spring of 2023.

An online condolence can be left with the Anderson-Winfield Funeral Home of Greenville HERE.