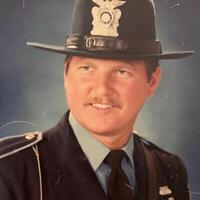 Lt. Lewis George Johnson, EGPD (Ret.), 70, of Fryeburg, Maine, formerly of Exeter, R.I., passed away peacefully at home surrounded by his loving family on December 7, 2021 due to complications from his courageous 23 year battle with Parkinson’s Disease.

Over the years, Lew was promoted to the ranks of detective, sergeant and lieutenant. He was a member of the department’s SWAT Team and the Honor Guard. Lew retired from the East Greenwich Police Department in September 1997. Upon his retirement, he and his wife Carol moved to the North Conway area of New Hampshire, eventually settling in Fryeburg. Lew was the owner and operator of the Bavarian Chocolate Haus in North Conway for 11 years, before retiring from the chocolate business. He was an active member of the Rotary Club of North Conway, earning the Paul Harris Fellow distinction. Lew spent his life leading by example in everything he did. For all who knew him, he was well respected for his kindness, generosity, selflessness and dependability. Lew always handled each and every situation no matter how complicated with the utmost calm and integrity. Among his many interests were reading, the history of World War II and the Vietnam War, building things and photography.

Above all else, family meant the world to Lew. He is survived by his loving wife of 38 years, Carol F. (Sweet) Johnson as well as his 3 children: Nicholas A. Johnson of Long Beach, Calif., Ashley C. Johnson and her husband Justin T. Keene of Standish, Maine, and Heather M. Johnson and her husband Dennis T. Screnci, Jr., of Peabody, Mass. Lew is also the beloved grandfather to Justin J. Keene, Jr., Jadyn B. Keene and Luca T. Screnci. In addition, he is survived by his eight siblings: Laurinda Forsberg, Martha McCarthy, Lynette Courtney, Myra Devaney, Emmett I. Johnson, Jr., Kenneth Johnson, Elizabeth Johnson and Brenda Smits, as well as many nieces and nephews. Lew is predeceased by his parents, Emmett I. Johnson and Sharon R. (Kotterass) Johnson as well as his brother, Gary L. Johnson.

A Requiem Eucharist will be celebrated on Thursday, Dec. 16, at 10 a.m. at St. Paul’s Episcopal Church, 55 Main St., Wickford. Burial will be in East Greenwich Cemetery, First Avenue, East Greenwich. Calling hours: Wednesday, Dec. 15, from 4 to 7 p.m. at the Hill Funeral Home, 822 Main St., East Greenwich. Donations in Lew’s memory can be made to the Michael J. Fox Foundation for Parkinson’s Disease Research.