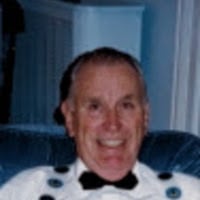 Lawrence Vernon Robinson, Jr., 88, passed away peacefully on September 4. He was the beloved husband of Patricia V. (McMullen) Robinson. Born in Acushnet, Mass., on May 9, 1934. he was the son of the late Lawrence V. Robinson and Ada (Calverley) Robinson.

A 1951 graduate of Fairhaven (Mass.) High School, he received a Bachelor of Science in Business Administration degree from Babson College in 1954 and a Master of Arts degree (ad eundem) from Brown University in 1968.

He was a staff accountant at the former Ernst & Ernst from 1954 to 1957 and was a financial officer of Brown University from July 1957 to September 1987, serving as Deputy Treasurer of the University the last 15 years. He was named treasurer of the former Providence Investors Company in 1987 and retired in 1992.

He was a member of the First Baptist Church of East Greenwich, serving at various times as treasurer, deacon, trustee, president and clerk. He taught the “Bethel Series” for many years.  He served in 2000 and 2007 as chair of the Pastor Search Committee. Beginning in 2001, he was chairman of the Facilities Committee during the “Renewing Our Foundations” restoration project. He served in the Department of Stewardship and Administration, Investment Committee and Canonicus Business Committee of the American Baptist Churches of Rhode Island and as president of the Baptist Home Board of Rhode Island.

He was a past master of King Solomon’s Lodge No. 11 F & A M; past chairman of the Grand Lodge of Rhode Island Scholarship Committee, a volunteer in the Emergency Services Department of Kent County Memorial Hospital; past chairman of the Board of Trustees of Brant Point Courtyard on Nantucket; a member of the East Greenwich Veteran Fireman’s Association, and a member of the Friends of the East Greenwich Free Library.