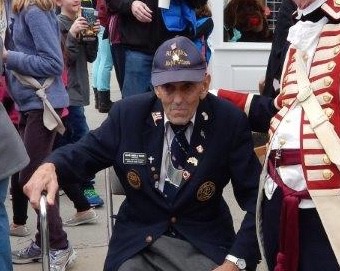 Jim was the son of the late Nelson H. and Emma K. Wilson and a familiar figure in East Greenwich for over 50 years.

For almost 40 years, Jim was the security officer and business manager of the Varnum Memorial Armory in East Greenwich. At various times, he was employed by the Town of East Greenwich, Country Squires Real Estate, and Urquhart/Murphy Funeral Home in Warwick.

Jim is survived by his niece Marjorie Kondrack of Mount Laurel, N.J., cousins Lydia Lefebvre and Dorothy Bonenfant, both of Warwick,  and many friends and acquaintances.

A  Mass of Christian Burial will be celebrated Monday, Jan. 26, at 11 a.m. in Our Lady of Mercy Church, Fourth Ave., East Greenwich. Relatives and friends are invited and may call on Sunday Jan. 25, 2015, from 2 to 4 p.m. in the Urquhart/Murphy Funeral Home, 800 Greenwich Ave., Warwick. Burial will take place in East Greenwich Cemetery.