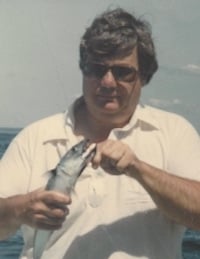 George M. Landes, 78, passed away on Friday, September 9, at the West View Nursing & Rehabilitation Center in West Warwick. He was the beloved husband of 53 years to Martha L. Landes. Born in Providence, on July 4, 1944, he was a son of the late Orrin and Edith (Jacques) Landes.

George was a graduate of the University of Rhode Island and Suffolk Law School. While at the University of Rhode Island, he was a member of Theta Delta Chi fraternity. After graduation from URI, he was active in alumni affairs. He became president of the Fast Break Club and also president of the Century Club and was a basketball season ticket holder.

He was a dedicated sports fan who especially loved the Boston Red Sox, URI basketball, the Boston Bruins and the New York Giants.

George was an attorney serving the Rhode Island community for over 50 years. George, who had a nickname for most everyone, was loved by all for his wit and candor.

George was an avid fisherman whose boat, Falcon’s Folly, was often seen at Jim’s Dock in Galilee. He loved fishing for tuna at “The Canyons.”

At George’s request, his funeral service and burial will be private.

An online condolence may be left with the Carpenter-Jenks Funeral Home & Crematory HERE.