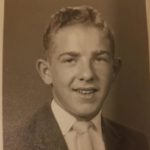 Adolph Francis Perretta Jr. passed away peacefully at home, surrounded by family and his dogs on Sunday, Jan. 24.

Adolph, also known to many as Sonny or Scat, was born on Oct. 5, 1939, in East Greenwich. He is predeceased by his parents, Adolph Perretta and Rose Perretta (maiden name Ciunci), his brother Robert Perretta, sister Jeanette Farmer, and his wife of 37 years Carletta Sue Perretta.

Adolph took pleasure in the simple things in life, including animals, nature, music, and spending time with family and friends. He played softball for an East Greenwich league, coached his daughter Lianne’s softball teams for a handful of years, and was an avid golfer for all of his life, including being part of a league at Exeter Country Club.

Adolph worked as a mail carrier for just over 33 years at the East Greenwich Post Office. There he held a rural route up Frenchtown Road and was considered a wonderful mentor and friend to many. When he retired he worked at both Exeter Country Club and Rolland Greens County Club up until the age of 78. He thoroughly enjoyed his time at both jobs. In his last few years of his life Adolph helped his daughter Lianne foster dogs, something they were able to bond over and that gave him pride.

A special thanks must be given to his CNA Colleen, who befriended and spent time with Adolph in the last six months of his life. She brought him home cooked Italian meals, took him out to lunch and shopping, watched movies with him, and brought a smile to his face and warmth to his home every time she was around. He cared deeply for her and they told each other they loved the other every time she left for the day.

Adolph leaves behind his daughter Lianne Perretta and her partner Matthew Jones, both of Moosup, Connecticut, and his beloved animals, 8 dogs and 1 cat, including his best buddy Olive, a Boston terrier. He also leaves behind his sister-in-law Emilie Perretta, brother-in-law Bill Fisher, his 4 nieces and nephews Robert Perretta Jr., Janet Simas, Keleigh Vanmeel and Jason Farmer, as well as many great nieces and nephews, cousins, and many dear friends that treasured him. Adolph will be remembered as a good man with a kind soul, a family man, a loving father, and friend. He will be greatly missed.

Here’s a link to the mortuary.