Editor’s Note: This story has been revised since it was first posted to correct the projected town 2018 deficit number and the schools 2017 deficit number. EG News regrets the errors.

The Town Council and School Committee will sit down together Monday with three weighty issues on the agenda:

They will meet at Swift Community Center at 7 p.m. 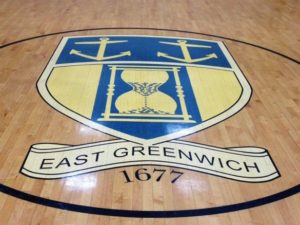 Linda Dykeman served as finance director for both the town and the school department before her departure in November. That change – to a consolidated position – was pushed by former Town Council President Sue Cienki and former Town Manager Gayle Corrigan in 2018 as a cost saving measure. According to consultant Mike D’Amico (hired in December), based on the budget sizes alone, one person should be able to do that job. However, because the School Committee and the Town Council are separate municipal authorities, there is built in tension for such a consolidation – essentially, one person, two bosses.

But since there is no one serving as a finance director now, the question of whether or not to keep the position consolidated needs an answer before posting the job (or jobs).

Fiscal year 2018 ended more than six months ago. While they were here, Dykeman and Corrigan had declined to update the council and the public on 2018, backed by then Council President Sue Cienki. On Monday, D’Amico will present an unaudited look how the town’s year ended – the official audit is still in process. D’Amico has told Town Council President Mark Schwager he doesn’t anticipate an major swings between this unofficial report and the official audit (due by the end of February).

The third item on the town-school agenda is the School Committee’s request for $700,000 in additional money for the current year so the district can be in compliance with the state’s Basic Education Plan. This follows an audit the School Committee had done last summer and that audit’s recommendations. The challenge for the town is that whatever extra money the town gives to the school district will be part of the schools’ budget going forward. In other words, this is not a one-off request.

Also on the agenda for the Town Council Monday is a renewal of alcohol licenses for Feast and Kai Bar, both having been given extensions in December. On the executive session agenda, the council will review 11 lawsuits against it that are being handled by the town’s insurance lawyers. Of the 11, 7 are lawsuits filed by employees or former employees under Gayle Corrigan’s time as manager.