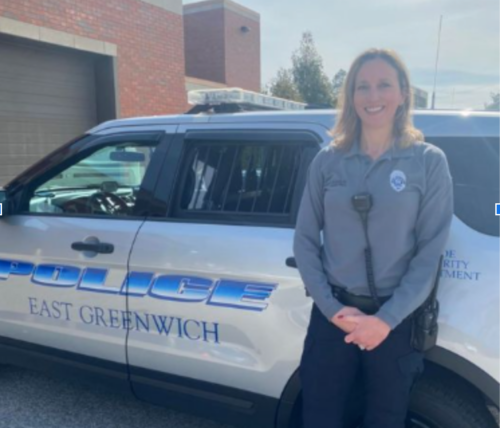 After almost six years without an animal control officer, the East Greenwich Police department welcomed Kelley Thurber into the position in April. Animal control officers deal with lost or stray animals, complaints about animals, the humane treatment of animals and, occasionally, wild animals.

“I have always loved animals,” said Thurber. She owned her first dog at the age of 18 and has not been without a dog since. It has always been her dream to do something in the animal field, and becoming an animal control officer was the perfect opportunity to combine her love for “the East Greenwich community and animals.”

Before Thurber could begin her new job, she need to get some training. First, she had to get certified by by AACIS (American Animal Cruelty Investigation School). That comes out to 80 hours of training. Among the types of equipment she needed training for was the infrared thermometer, a tool that measures the temperature inside vehicles. Sometimes people leave leave their pets in the car when they go into a store. That’s usually all right during the fall or spring months, but much more dangerous on high heat days or days with frigid temperatures. With the thermometer, Thurber will be able to learn quickly if a car is too hot or cold to be safe.

In addition to the AACIS certification, Kelley has worked with North Kingston Animal Control Officer, Brittany Curran. “I spent a couple of days with her, she was great,” Thurber said. “Just to get a feel of what it’s like to be out on the road and go to calls.”

Kelley will be enforcing the town’s leash law. East Greenwich does not have a dog park so dogs are supposed to be on a leash when out in public. She made it clear that Scalloptown and Frenchtown parks are not dog parks, and those who unleash their pets at these locations will be fined $25. Kelley knows many residents would like the town to create a dog park but until that happens, her job is to enforce the law.

Keeping up with dog licenses is another major part of Thurber’s job. By town ordinance, residents are supposed to get a license for their dog and renew it yearly. So far, Thurber said, residents have made it pretty easy for her.

“People in East Greenwich seem to be great with their dogs, you know, keeping them on leashes and getting them licensed,” she said.

Thurber said she’s also going to be focused on educating the public about vaccination laws (particularly the importance of rabies vaccination).

A typical day for Thurber starts around 8 a.m. by checking any overnight communications. She then “generally takes a run around town to see if anything needs to be picked up or dealt with.” Following up on bite and animal attack reports is also something that happens daily. “No two days are the same,” Thurber said. She gets a variety of calls spanning from animal-on-animal attacks and even a raccoon in a dumpster, she said. But, she added, “The job definitely comes with its downs. It’s not easy dealing with dead animals, or staying neutral in animal fights, but it’s all part of the job.”

What Thurber likes best about her new job is “just the opportunity to get out and talk to people … about their pets, and educate some who want to learn more about the animal world.”