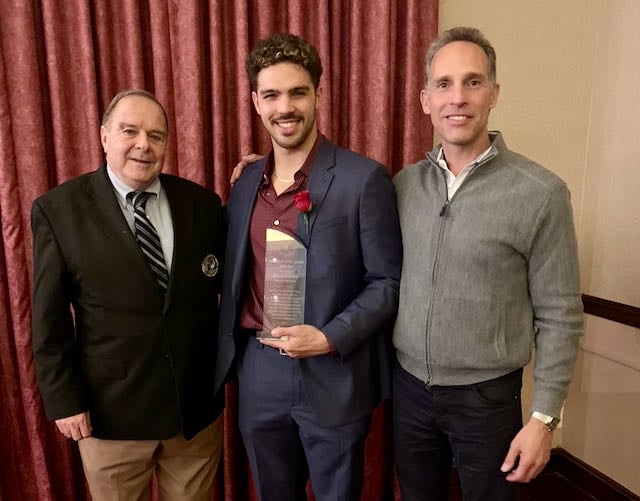 The night started with introductions and an invocation. Then the first award, the Lou Cimini Officiating Award, went to the Officials Association’s pick, CHRIS HADDEN, an outstanding official on the gridiron held in high esteem by his fellow arbiters, coaches and players alike.

The outstanding Divisional High School Coaches were then honored: In Division 1A the pick was MIKE WASHINGTON of Central High; Division 1B pick was veteran coach DINO CAMPOPIANO of Shea; JAY ADDISON of Mount Pleasant won the Division 2A selection; In Division 2B it was KRIS MCCALL of Classical. MATT BLESSING of Narragansett took home the trophy for D3 while Exeter/West Greenwich mentor CLIFF FORTIN won for D4.

Awards to the outstanding players in each division went as follows: High School Lineman of the Year in D1A was RYAN HAZARD of South Kingstown. NATE FIELD of North Kingstown won for D1B. In D2A it was CHRISTIAN LASSAHN, while Tolman’s DEVIN WARD won for D2B. In D3 COLIN FLYNN of Narragansett won and for D4 it was Ponaganset’s NICK VINER.

In the High School Back of the Year competition: BEN HURD of Portsmouth won for D1A. JAMEZELL LASSITER of LaSalle Academy took home the award for D1B. Mount Pleasant’s DEUCE ADDISON won for D2A while St. Raphael Academy’s ANDRE DEPINA-GRAY was the choice from D2B. REIDER FRY was the choice in D3. He toiled for Narragansett. MARCUS CARPENTER finished the category winning in D4 while playing for Ponaganset.

College MVP’s were E.J.PERRY, QB of Brown University; RYAN SADDLER, LB from Bryant University; PETE NOONAN, a lineman from Salve Regina University and CALEB WARREN, TE from the University of Rhode Island. All four had standout seasons for their respective teams, with Perry, in particular, impressing NFL scouts at workouts and in the East-West game. Present to talk about their players were Bryant Head Coach, CHRIS MERRITT; Brown HC, JAMES PERRY and URI’s JIM FLEMING.

MATT SYLVIA of Salve Regina University received the Home Town Hero Award for 2021 while STEVE GACIOCH received a 2022 Pride of Rhode Island Award. University of Michigan star, KWITY PAYE, currently with the Indianapolis Colts, was unable to attend but was named as a 2021 Pride Award winner. LEANDRO DEBRITO of Duquesne was unable to attend and accept his 2022 Pride Award while URI’s ANDRE BIBEAULT was down with the flu and missed out on getting his 2022 Home State Hero Award.

The Lawrence P. Gallogly Humanitarian Award is given annually in memory of the afore-named individual, a beloved and longtime member of the Providence Gridiron Club. He was an unselfish giver to many people and organizations throughout the years. This year’s award went to longtime coach TOM CENTORE, who has also given of himself over many years as a player, coach, teacher and administrator.

Near the end of the night, the Presentation of the Jack Cronin Award to the Rhode Island High School Coach of the Year, went to Shea’s DINO CAMPOPIANO.

The Frank Morey Award to the Rhode Island High School Lineman of the Year was given to NATE FIELD of North Kingstown.

REIDER FRY of Narragansett was the  pick as the Frank “Monk” Maznicki Rhode Island High School Back of the Year.

The feature presentation of the night was the Gilbane Trophy to the 2022 Rhode Island High School Player of the Year, which went to MARCUS CARPENTER of Ponaganset, who amassed amazing statistics as a runner, passer, and receiver his senior year.

The Dick Fossa Memorial Scholarship was given out by Mrs. Fossa to BRADY BURKE of Pilgrim and NATE FIELD of North Kingstown. Each boy received a $1,000 scholarship in Dick’s name. Mr. Fossa was a longtime R.I. coach, teacher and athletic director, who passed away last year all too young.

The Providence Gridiron Club would also like to recognize the following: For their longtime support and fabulous meals, a tip of the hat to everyone at The Quonset “O” Club. They do a superb job every meal (six a year for the PGC) and are great to work with.

Last, but certainly not least, are the sponsors, who come through year after year to keep the PGC going. Anderson Motors and Anderson Sales of New England; the Gilbane family, and Washington Trust Bank

have contributed mightily to the PGC.

The Gridiron Club has been in existence since 1945. Its sole reason for existence is the promotion of football at ALL levels in Rhode Island. They put on six dinners a year: Leadership Night, Captain’s Night, MVP Night, Hall of Fame Brunch & Night, Super Bowl Night and the Annual Awards Night.

The Club could use not only some more members, but also more backing from former Hall of Fame members. Even a small contribution by attending the HOF dinner, or a monetary remuneration of $50 or so would really be a big help. Contributions are tax deductible. For more details and information about the club, contact President Robert Izzi at [email protected] or 401-378-4393.