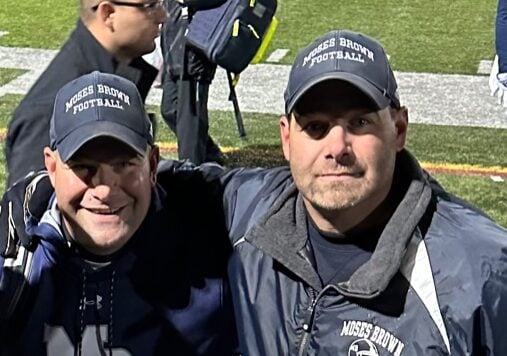 Vin and Joe Ucci have been around sports their whole life. They are great nephews of the legendary, Anthony “Tar Tar” Ucci, a renowned athlete from the East Greenwich of lore. Along with brothers Dave and Anthony, they have played them all. Dave has gone on to prepare athletes for life after the fourth quarter. He is a mortician at Hill’s Funeral Home. Anthony has been coaching baseball at the high school and AAU level for a long time.

But, twins Vinny and Joe, and are bonded together by a love of family and football. They both played it at East Greenwich High and they have continued their love of the gridiron in the coaching ranks.

They started off as assistants at East Greenwich High School and then moved on to Moses Brown. Now Vin is the head coach there and Joe is associate head coach. They both are passionate about the game.

All that passion played off Saturday in the D3 Super Bowl at Cranston Stadium, where the Quakers squared off with the equally talented and tough Middletown Islanders from the East Bay. After 48 hard-fought minutes, the Blue and White boys from the East Side came away with the victory. Those 48 minutes capped an undefeated season for Moses Brown. Those 48 minutes will last a lifetime. It is something that can never be taken away. Years hence, the twin coaches and the players they looked over Saturday, will be getting together over food and drink to relive all the glorious moments of that championship season.

On Oct. 26, Coach Joe Ucci represented Moses Brown at the Providence Gridiron Club’s Captains and Leaders Night, where he introduced several members of the Quaker’s team, which proved their capability on Saturday (11/19).

Last Wednesday at the PGC’s Annual Super Bowl Night, Vin Ucci introduced even more of his players and gave a brief speech detailing their unbeaten season while giving due credit to the Middletown team for reaching this year’s Super Bowl.

On Dec. 14, the Club will honor the MVPs of all the 44 football playing high schools in the state. One boy from the offensive side of the ball, and one from the defensive side, picked by their coaches and teammates, will be honored.

They will be given plaques representing their honor and have pictures taken for display in their local newspaper.

Another sidelight to the Super Bowl Night dinner was the presence of players from the 1972 Super Bowls, the first in the state of Rhode Island. In that first Super Bowl Cranston East faced off against Woonsocket for the Class A title, while East Greenwich tangled with Middletown to see who would be the first ruler in Class B.

Paul Sylvia represented the winning Cranston East team at the podium recounting his team, teammates and the game, telling the current group of Super Bowlers what it felt like back then.

John Abbatte did the same thing for Woonsocket, while Paul Magliocco, son of the winning Islander team’s coach, gave another version of events for that historic day.

However, the longest, and most impassioned speech, came from East Greenwich’s own Dr. Fred Procopio (pictured below), who waxed eloquently about all the Avenger team went through that year and the anticipation and excitement locally for his Avengers, who had finished a rare undefeated season in Class B, only to fall in the Bowl game.

It was a great occasion which hopefully can be repeated every year, maybe with the teams from the 1973 Super Bowl being invited, and so on.

The Providence Gridiron Club has been in existence since 1945 to promote football at all levels in the state of Rhode Island.