East Greenwich/Warwick, R.I. – After 15 hours on the lam and an extensive search Monday, K-9 Ruby turned up not too far from her home in the Potowomut section of Warwick, no worse for the wear.

“It’s like losing a family member and then being reunited after 15 hours,” said Ruby’s handler, Daniel O’Neil, Tuesday morning at the Wickford State Police Barracks. According to O’Neil, when she saw him, Ruby put her tail and ears down, a sign of submission. “She knew she was in a little trouble,” he said. But O’Neil gave Ruby a big hug. 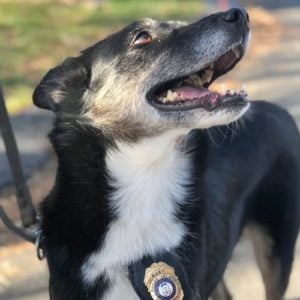 “She was very happy to be home,” he said of the award-winning dog. Ruby, on the cover of Rhode Island Monthly this month, made headlines earlier this year when she was named a “Hero Dog” of 2018 by American Humane for locating a missing teen in the woods in Glocester in 2017.

Ruby herself went missing while she was outside at home playing with the O’Neil’s family dog. O’Neil said he was unsure how Ruby got out.

“The outpouring of support was really how I stayed positive,” said O’Neil. “It was amazing to see how many lives she touched and changed and that that many people would come help me find her. Words can’t express how happy I am she’s a part of my family. We have been together for eight years and have never had anything like this happen.”