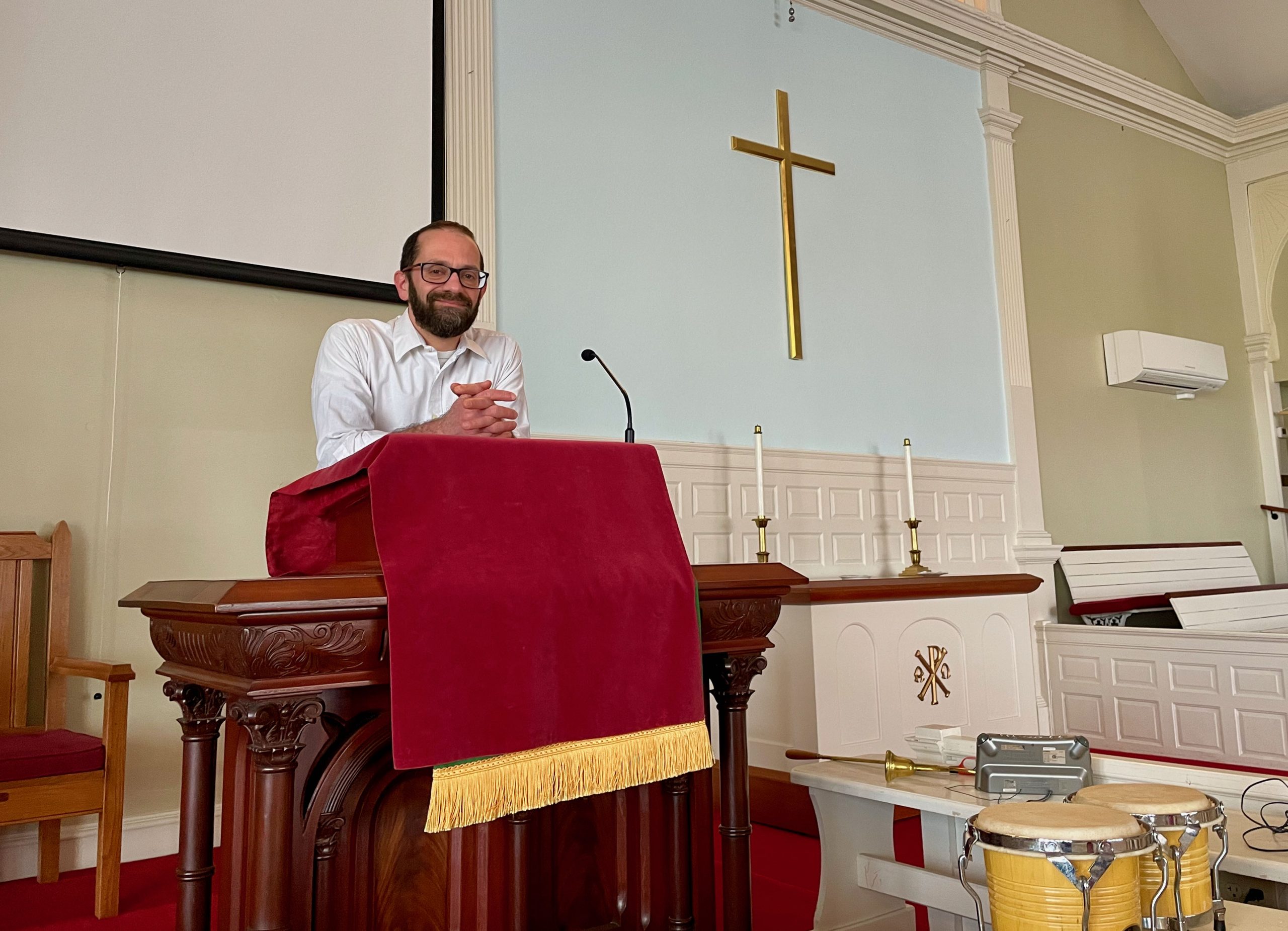 Above: Pastor Jonathan Malone on the altar at East Greenwich First Baptist. 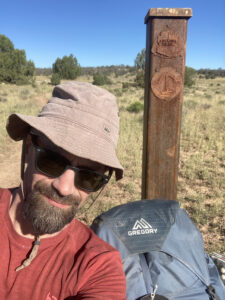 Jonathan Malone on the trail in Arizona last summer.

Typically, a pastor leaves a position to move to another church or perhaps an administrative church position. But Malone is heading out into uncharted territory – literally. Malone has founded an organization called Wilderness Journeys. His intent: to bring people of all faiths or no faiths into the wilderness and connect with God – however God is understood, Malone says.

Malone, 47, says he first heard the call to ministry when he was just 10, growing up in Albany, N.Y. In high school, he was “very involved” in both music and church (he grew up an American Baptist). College meant choosing between the two  – he opted for music (Malone plays the bassoon) and studied at Oberlin for two years. He then transferred to SUNY Potsdam, which was less intense than Oberlin, and graduated with a degree in music. But the call to ministry was still there.

Malone and his wife, Rebekah, got married two weeks after graduation. Then it was on to seminary (Andover Newton Theological School). He was doing church ministry by age 25. He served in churches in Ohio and Pennsylvania before coming to EG First Baptist in 2009.

“This is all I’ve known,” Malone says, referring to parish ministry work. “It’s a call. If you can do something else, you would.”

He says that with a smile – he’s loved his time at First Baptist.

“This church is a very giving church. It’s willing to try things, take chances. I’ve been really blessed by that. It’s a very, very supportive church. Really good at celebrating too,” he says.

But ministry is hard work.

“Carrying a congregation is exhausting. I think eventually I may miss that but I won’t right away,” he says. “The burden’s heavy.”

Some days, he says, you’re going from a funeral to a wedding – ”an emotional roller coaster. It wears on you.”

Despite those challenges, there is much he will miss.

“People let you into some of the most vulnerable parts of their lives with parish ministry,” he says. “Being at people’s death beds. Being with them when they’re in those places of real rawness, physical and emotional. I’m going to miss that. I don’t enjoy that. It’s not fun. But it’s powerful. And I’ll miss preaching as well and having a regular youth group.”

Parish ministry can be similar from church to church, but each church is different.

“I have a tattoo for every church where I’ve served,” Malone says. “This one got the tattoo ‘Grace’ – Gratia – because this church is a gift.”

Malone says the decision to switch to a different type of ministry started with his sabbatical a few years ago.

“I backpacked and climbed all the high peaks in the Adirondacks – 46 of them in those three months. I had been hiking, backpacking before then, but that time really ignited it again. And there was this constant question, how could I get back to that again. I’d been leading groups – church groups, youth groups, that kind of thing, but there’s just been this hunger to be in wilderness more and to take more people there,” he explains.

“It got to the point where I either do it full time or I’ve got to stop. I can’t do both. I can’t be a pastor of a church and keep leading the hikes in the way that felt right to me.”

While Malone’s work life will change a lot, he and his family are staying put in Rhode Island. The Malones, who live in Warwick, have four sons, ages 14 to 22. Rebekah Malone works as a school psychologist in Barrington.

For this first year, Malone is offering 3-day to 5-day trips from beginner to advanced, in the Adirondack Mountains of New York, the White Mountains in New Hampshire, and even one in Northern California.

He is excited to get people out into the wilderness. “It puts us in a challenging spot that can be really rewarding,” Malone says of the experience. “That’s what I want to bring people to.”

You can find out more about Wilderness Journeys HERE.