‘Have You Heard Yet?’ At EGHS, the College Dance Revs Up 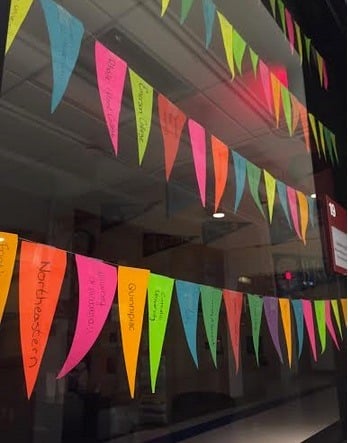 EGHS seniors write the names of the schools they’ve been accepted to on small pennants that hang in the window of the Guidance office.

Around EGHS these days, college is on everyone’s minds. Or maybe it just feels that way when you’re a senior. From the first day of preschool, parents are worried about college funds, meeting benchmarks, and getting their kids involved in activities like sports and playing instruments. By middle school, students are worrying about college too and starting to focus on making sure they have good grades, they get into accelerated math, and they have strong extracurriculars.

When high school finally rolls around, every other word both students and parents hear is “college.” Guidance counselors begin asking students about their college plans freshman year, and most students begin taking standardized tests like the PSAT sophomore year. Many of the courses at the high school are either labeled as “college preparatory” or “advanced placement,” meaning the class can count for college credit. The high school even offers real college courses for transferable credits through URI, like Writing 104 and Personal Finance.

Clearly, college is important in this town, and that puts a lot of pressure on the students. There is nothing surprising about seeing a student crying after receiving a low test score or stressing out about a big project. Many students give up hours of their youth to sit in all-day SAT tutoring sessions or to stand outside in December for six hours of community service.

After the weeks of double sessions on the soccer field and countless nights staying up past midnight writing papers, it all comes down to NOW – with college applications largely done, the agony of waiting has moved center stage.

Some students have already heard back from colleges. If you applied early, by around Oct. 1, you probably heard whether you got in by mid-December. Or maybe you were “deferred” – that’s when a college isn’t ready to accept you but isn’t sure about rejecting you either, so your application goes into the regular applicant pool.

This year, most of the students at EGHS who applied early to schools like Brown, Harvard, Penn, MIT, and Cornell were deferred. And so the wait goes on.

Regular-decision applications are due in January and decisions are usually released at the end of March. This is the most common application pathway as it gives students the most time to get teacher recommendations, take tests like the ACT or the SAT, and work on application essays. After decisions are released in March, students will have until May 1 to select a school and send in a deposit.

The third, and most uncommon, type of admission plan is rolling, which means that there is no firm notification date. Rather, students are notified a few weeks after submitting their applications. Many EG students have been accepted to schools like UVM and Tulane via rolling admission decisions.

So, how many schools to students apply to? Some people only apply to one school early – a school they really want to go to. If they get in, they save themselves the application fees (which can be as much as $85) of other schools. If they are rejected or deferred, they have time before the Jan. 1 deadline to submit applications to other schools. Some EG students applied to 14 or 15 schools this year, which can get expensive since it costs money not only to apply but also to send official test scores (about 12 dollars per school for that). Many end up applying to around 7 or 8 schools, and that number is less for those who choose early admission plans and get accepted to their top choices early.

Most EG students say early admission is the way to go. Already, students have been accepted to schools like Brown, Northeastern, American, Providence College, Fordham, Quinnipiac, and Colby.

While classmates are biting their nails, waiting for the fateful month of March, these early admitted students are breathing easy. Kathy Luo, who was accepted to Brown University, describes her experience with Early Decision, and her take on the college admissions process:

“Getting into college early is definitely a surreal feeling. The first week after finding out, I woke up every morning wondering if I had dreamed it all up. Even now, I sometimes still catch myself thinking, ‘How are my chances for getting into college with my grades right now? Should I be entering a competition or something? Is there an SAT I should be studying for?’ And then I remember that none of that matters anymore, and it’s as much of a shock as it is a relief.”

Luo said she’s noticed she’s getting a new kind of question these days.

“Instead of asking, ‘Where are you applying? people now ask, ‘What’s your intended career?’ Instead of, ‘What did you get on the SAT?’  it’s “What’s your major?”

The beat goes on.

Catherine Streich, a senior at East Greenwich High School, has heard from one early action school (in!) and six regular-decision schools.