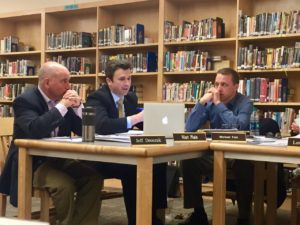 Is it legal for a school district to charge any type of fee for field trips?

East Greenwich, R.I. – What is a field trip? Who should go? Who should pay for it? These are some of the surprisingly thorny questions that the School Committee wrestled with during its meeting Tuesday night, in considering changes to its field trip policy.

After lengthy and, at times, contentious discussion, the committee voted 7-0 to seek an advisory opinion on the issue from the office of Education Commissioner Ken Wagner.

It’s an issue the School Committee has been grappling with for the past few years, every time a teacher would come before the panel for permission for an long-distance trip such as to Costa Rica, the Galapagos, or the annual 8th grade trip to Washington D.C. Those trips all cost a lot of money and invariably a School Committee member would ask if enough was being done to make the trips available to those who might not be able to afford them. In most instances, there would be some fundraising, but the majority of the cost would be paid by families.

Typically, the foreign trips take place over a school vacation and, though led by a teacher or teachers, those trips are run by an outside vendor. One question that has come up repeatedly: why do those trips need School Committee approval at all, since they are not official school trips?

That’s a part of the policy that’s being reevaluated.

But the Washington D.C. trip takes place during school and is a part of the 8th grade curriculum. Students are invited to attend but it is not mandatory and the cost – around $1,200 this year – is borne by families.

For School Committeeman Matt Plain, that is not right and it’s not legal. He has voted against all such trips that have come before the committee since he was elected in 2014.

Two years ago, the school district’s lawyer, Matt Oliverio, wrote an opinion for the committee on “the appropriateness of charging for school-sanctioned field trips.”

“The issue may turn on whether or not the proposed field trip is a necessary part of the public school’s core education curriculum. We conclude that if such a field trip is an integral component of the curriculum, otherwise essential or core to the delivery of instruction, then a fee may not be charged. If, however, such a field trip is simply an enhancement or enrichment of a program such that it has only a tangential benefit or bearing on the student’s educational development, a fee may be charged.”

He added that state law allows school districts to accept donations and that districts can fundraise, as long as it is “conducted on a voluntary basis….” (Find his whole opinion here: Field Trip Advisory.)

But the opinion languished before more pressing School Committee concerns, until this year, when the policy subcommittee took up the work of updating the field trip policy in earnest. The subcommittee returned it to the full School Committee for additional guidance and that was the discussion Tuesday.

If students are to attend a play, for instance, in Providence, relating to a piece of literature they’ve been studying, and the trip takes place during the school day, who pays? In East Greenwich, the bulk of the cost is usually borne by the PTGs, but often parents are asked to pay say $7 to cover the cost of bus transportation. Small fees abound in EG schools, for more than just field trips.

Committee Chairwoman Carolyn Mark suggested the committee ask Commissioner Wagner for an advisory opinion about how East Greenwich has been interpreting the law with regard to field trips.

“The worst case scenario is that they say, you’re doing everything wrong and we have to immediately change everything. Or they could say, you have some latitude here,” she said. “One of the reasons this has taken so long is that we continue to discuss and debate the law.”

For Plain, however, the law was clear.

“Rhode Island public schools may not charge a fee for school services or programs. I don’t need an advisory opinion,” he said.

Committeeman Michael Fain was unconvinced and said he wasn’t sure field trips qualified as “programs.”

“If it’s not a program, then what are we doing discussing it?” said Plain, noting the School Committee’s mandate was to oversee school programs and only that.

Committeewoman Lori McEwen said her issue was with the definition of field trip and “what should come before us for approval.”

Committeewoman Mary Ellen Winters said she didn’t see a problem with the way field trips were currently be handled, stating that she didn’t think there was ever a student who had been deprived of a school trip because they could not afford it.

“Principals have line items in their budgets for specifically that item,” she said. “The principals know who those children are. It doesn’t come to the point that those kids have to go to the principal and ask.”

Winter said there was no way the district could afford to cover the cost of all the field trips currently offered. If that was mandated, she said she feared there would be no more field trips at all.

Several on the committee took issue with Winters’ characterization that no student was ever deprived.

But some parents in attendance at Tuesday’s meeting also spoke of their worries that field trips would disappear if the district was required to pay for them.

“This is a really extreme road that we’re going on and once you take the genie out of the bottle, you can’t get it back,” said Tara Wood, a parent representative on the policy subcommittee. She mentioned other fee-related offerings, such as the school drama clubs or special out-of-state cross country meets.

“All these things … have seeped into the culture of trying to give our children the best that we can as the school budget is level funded,” she said. She said if the policy were changed, the culture would change.

Parent Rick Land warned the committee about seeking an advisory opinion from RIDE.

“Asking for this opinion is probably going to lead you down a path you may not want to go down,” said Land. “Right now, you have some flexibility to make some determinations you want to make … without having an answer imposed upon you.”

Parent Alyson Powell took a different tack. Although East Greenwich is 26th in terms of per-pupil spending on schools out of the 34 school districts in Rhode Island, Powell said, “we expect to be in the top three school districts in the state…. If we step back and say no, we’re not charging fees, so this is what our school district looks like when parents don’t pick it up – instead of in the form of taxes, in the form of this fee or that fee – this is what school looks like.”

Then maybe, Powell said, “if people don’t like that maybe we need to reassess as a district, as a community.”

Donate to East Greenwich News and support local news – click on the Donate button below or send a check to EG News, 18 Prospect St., E.G., RI 02818. We can’t do it without your help!