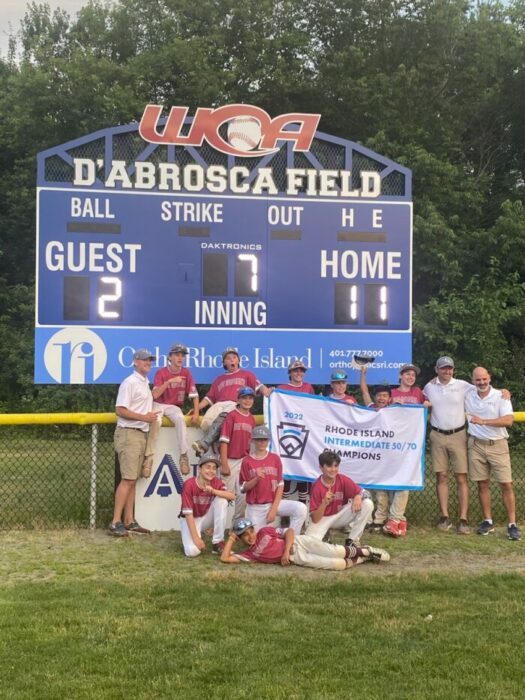 East Greenwich Little League only started its Intermediate division last year but it got off to a good start in 2021 and this year the EG team won the state championship and traveled to Long Island to compete in regionals. While they didn’t make it far, the team garnered a lot of praise for its resilience and sportsmanship.

The Intermediate division was only created on the national level in 2013, for players 11 to 13 years old. With 50 feet between the pitching mound and home plate and 70 feet between bases, the new league was meant to be a bridge between the standard Little League field (46-foot pitching distance and 60-foot base paths) and the Junior/Senior field size (60-foot, 6-inch pitching distance and 90-foot base paths).

It’s been a little slow to catch on in Rhode Island, with just EG and Westerly competing last year and three teams (Barrington joined) this year, but the EGLL officials are hopeful more communities will establish teams for more robust play on the state level.

“I think you’ll see it grow in the future in R.I.,” said team manager Bryce Jackson. “The competition level at the regional level was legitimate.”

To get to regionals, East Greenwich had to beat Westerly first and then Barrington. The most exciting game turned out to be game three against Westerly. Each team had won one game apiece but in the deciding third game, EG was down 7-5 in the bottom of the first inning with 2 outs when Nolan Colucci hit a three-run homer.

“That was awesome,” said Jackson. “The contribution of the 3-run homer was big, but the team itself put the collective first.”

Noting that it’s in adversity that a team is tested, Jackson said he and the other coaches were really impressed with how this team handled it.

“It’s how you react to the ups and the downs,” he said.

In the state tournament, Kevin Chen hit a home run in game 2 against Barrington. Chen was the lead off batter – he hit the home run on the second pitch of the game and “it set the tone.”

Ayaan Modi pitched the first game in that series and Jaxson Ayotte pitched in game 2 – both were runaway victories.

Here’s a video of the final out of state final against Barrington:

The Regionals were harder. But despite the tough competition, the team did not give up, coaches said.

The team was made up of boys from four different middle schools: Cole, de la Salle, Rocky Hill and Our Lady of Mercy.

“You would never tell that the boys didn’t see each other all the time and known each other for years,” said Jackson. “You really would have assumed these boys have been playing together since t-ball.”

“They demonstrated resilience from the beginning,” said coach Andy Colucci.

“There’s nothing I can be more proud of then displaying sportsmanship,” he said. 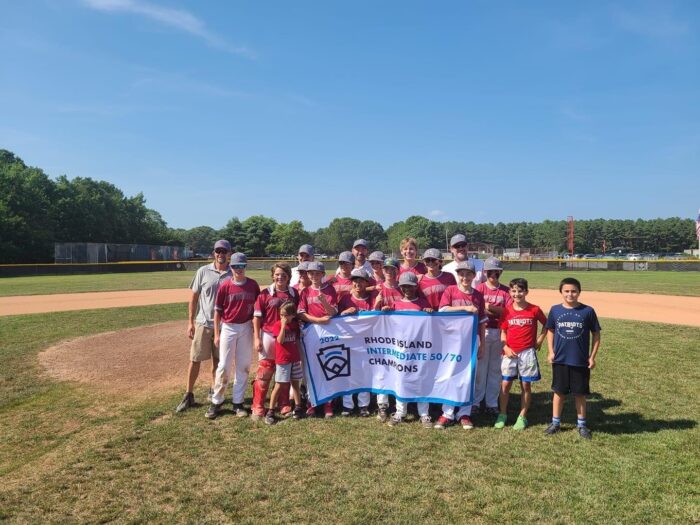