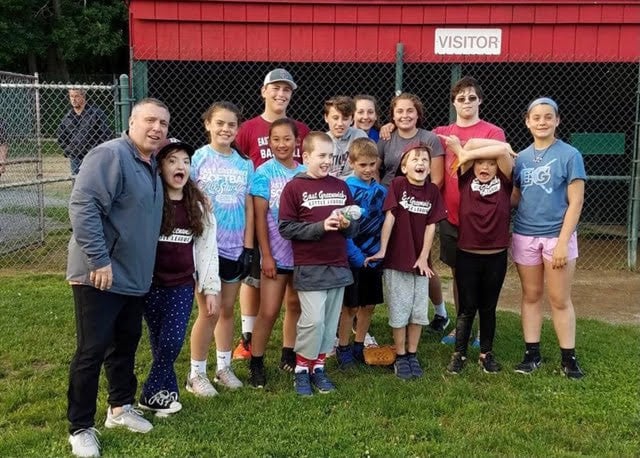 Above: Josh Land stands behind members of the EGLL Challenger team.  The high school senior started volunteering with the team in fifth grade.

Joshua Land, a senior at East Greenwich High School, recently won the Prudential Spirit of the Community Award for Rhode Island. The program awards students based on community service, choosing state and national honorees which are given a scholarship and medal. Josh applied last November. It took a while but he learned in February he’d been selected.

“I had to do a return at Nordstrom Rack with my sister, and I came home, and there was a package sitting at my garage,” described Josh in a joking manner, “and I thought that’s normal, another thing ordered online.”

Looking closer, however, he saw the Prudential Spirit of the Community Award seal and realized he’d better open it!

Land has been participating in the E.G Challenger/Tops Youth Sports program since 5th grade. The program gives children with disabilities the opportunity to play sports, with the help of “buddies.” Land worked as one of the buddies, and later as an assistant. Along the way, he’s made a lot of friends.

“For me, youth sports were a huge part of my life growing up and so being able to see these kids have the same opportunities that I did and enjoy them as much as I did is so rewarding because I know that I am helping and being a valued member of the community to these kids,” said Land.

Josh plays catcher as Olivia waits for the pitch.

Josh currently works with a young girl named Olivia, who along with her fellow teammates, enjoys teasing Josh during practice. During baseball season, she tries to outdo him, knowing it’s his favorite sport – he’s a captain of the EGHS Baseball team this year.

“She and I have this really close friendship now through this,” said Josh, “It’s really awesome because I get to help her love baseball.”

When Josh joined the program, it was just beginning and they only offered baseball from late spring into the summer. Since then the organization has grown, now including basketball, flag football, and soccer. Howard Faunce, who heads EG Challenger, has seen everyone involved in the program – athletes and buddies alike – grow along with the program.

“Our athletes are some young people with some challenges, some more than others, but when they play you wouldn’t know it,” Faunce said. “They have challenges that within an hour seem to disappear. They’re just laughing and having fun out there. The buddies are just special people and they help the program grow. Josh is kinda my go-to guy, but I have amazing, amazing buddies, just a bunch of them. And to see their interactions with the athletes, it’s inspiring, and I am excited to get to work with the group.”

About Josh’s award, Faunce said he wasn’t surprised but was very pleased. Josh is capable of anything he sets out to do, Faunce said.

“Josh is a phenomenal Avenger, whose advocacy and work for students with special needs is a tribute to the tenets of acceptance, inclusion, and respect,” said EGHS Principal Ken Hopkins, who validated Josh’s application. “We are proud to have him represent the Avenger community.”

The EG Challenger program is open for any student to participate as an athlete or buddy, regardless of the town in which you live. Contact Howard Faunce at [email protected].

The Town of East Greenwich's annual Memorial Day Parade will take place on Monday, May 30,  at 10...