EGHS Wall of Honor Ceremony: Memories, Inside Jokes, a Tear or Two 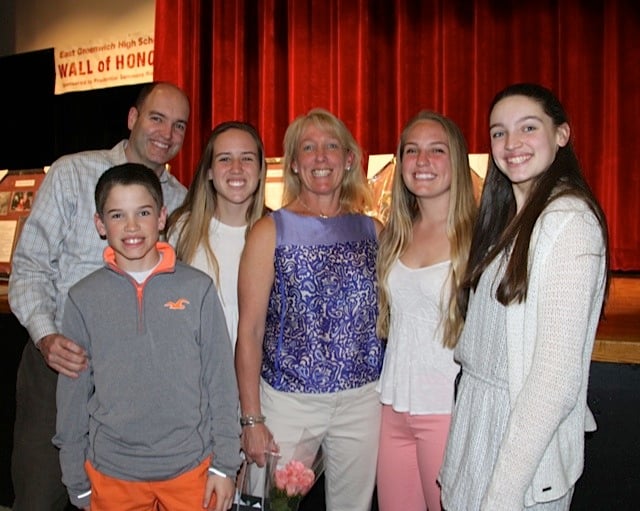 Town Councilman Mark Schwager offers commendations from the council to the 2015 EGHS Wall of Honor inductees.

The East Greenwich High School Wall of Honor Ceremony is hitting its stride, with a record 144 people in attendance Wednesday night, the eighth such ceremony. It helped that one of the inductees was current physical education teacher and field hockey coach Deb McMullen – athletes in their teens, 20s and 30s turned out to celebrate the popular coach.

“Looking around, I kind of wish we had some sticks so we could go out to play. We have a ton of talent here,” McMullen said her current and former field hockey players.

Former Rhode Island First Lady Sue Carcieri was inducted and many of her large family – including former Gov. Don Carcieri (and 2013 Wall of Honor inductee) –were there to cheer their mother and grandmother. Mrs. Carcieri spoke most poignantly of the hardships her family endured after the untimely death of her father.

“Not everybody starts out with everything handed to them,” Carcieri said. She recounted how she was able to attend URI because the school gave her a full scholarship – $1,000 a year!

Longtime St. Luke’s Music Director Priscilla Rigg, who retired just in January after 50 years, rounded out the female half of the inductee class of 2015.

“I think, gentlemen, that I’m the first musician to be inducted,” Rigg noted.

McMullen, for her part, spoke of being able to work and live in East Greenwich.

“So, obviously, East Greenwich is an incredibly special place,” she said. “I grew up here. I went to school and graduated here. I had a vision to teach here … and it worked out, I was able to secure that job at Cole. And now we’re raising our family here.”

Deb McMullen with her family.

Fred Brown and Otto Olson, deceased, were represented by family members Paul Brown and Eric Olson, who both spoke of how both Olson and Brown served their community not for praise, but because it was the right thing to do.

In addition to the five inductees, Steve and Christine Bartlett were given the Wall of Honor Appreciation Award for their service to the town, most especially through their leadership of the Interfaith Food Pantry. Their daughter, Karen Seitz, accepted the award on their behalf.

If you have someone you’d like to nominate, contact founder Bruce Mastracchio at [email protected] or EGHS Wall of Honor committee head Bob Houghtaling at rhoughtaling2@verizon.net.

Karen Seitz, here with Town Councilman Mark Schwager, accepted the Appreciation Award on behalf of her parents, Steve and Christine Bartlett, during the April 15 EGHS Wall of Honor ceremony.