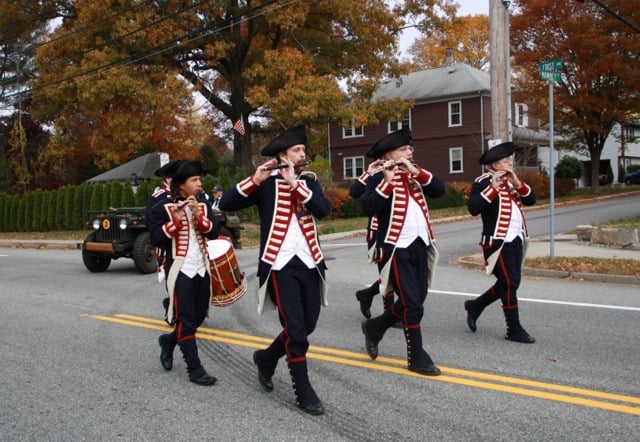 From Academy Field, the parade will continue to First Avenue (Rt. 401) for a wreath-laying ceremony at the corner of Cliff Street. The parade will then proceed north on Main Street to the Town Hall for closing ceremonies to conclude at about 2 p.m. Commander John Holmes with the East Greenwich American Legion Post 15 will continue as the master of ceremonies.

The “Lone Piper” Aaron Lindo will lead the parade, which will feature color guards from the Police and Fire Departments along with the always resplendent local militia groups the Kentish Guards, Varnum Continentals and the Pawtuxet Rangers. Making their first appearance is the 2nd Rhode Island Company B; a Civil War reenactment group that honors those Rhode Islanders who fought in the American Civil War. Several veteran organizations will be present such as the American Legion Post 15, VFW Post 8018 and the float representing the Tomb of the Unknown Soldier.

Music will be plentiful with the debut of the Providence Brigade Band, the return of the rhe Rhode Island Highlanders Pipe Band and the EG High School Marching Band. Local scouts will march along with many community organizations displaying their patriotic spirit. Numerous classic and antique cars will participate along with the Blue Knights Law Enforcement motorcycle group. Local fire companies will display an array of apparatus.

Closing ceremonies will include remarks from Major General Christopher P. Callahan and a remembrance of Jesse Whaley, a World War I veteran raised in East Greenwich, presented by Patrick Donovan, curator and vice president of the Varnum Memorial Armory Museum. November 11, 2018 is the 100th anniversary of the end of World War I.

Families and friends of veterans, and all veterans not marching with another parade group, are encouraged to join a contingent of marchers to walk together on parade day. Please contact Jack Kelly for more information or questions at (401) 789-7667 or [email protected].

The town prides itself on being one of only a handful of Rhode Island communities to continue to sponsor this parade, honoring veterans of all conflicts, especially those who have given their last full measure of devotion.

In the event of inclement weather, Divisions 1 and 2 will hold a ceremony inside Swift Community Center at 121 Peirce Street. Contact Leigh Carney, Town Clerk, with any questions about the parade. 401-261-7729 or [email protected]