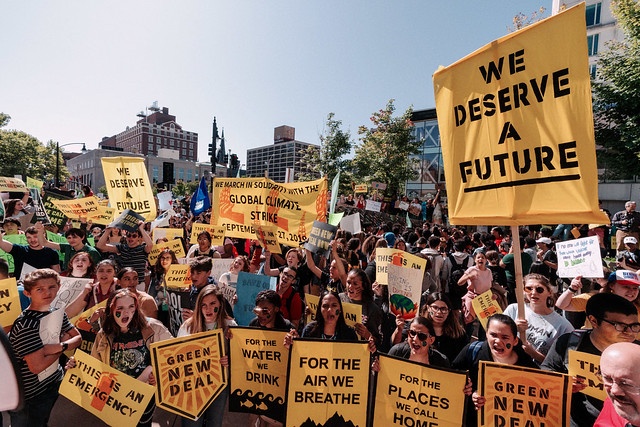 On Friday, more than 1,000 students from Providence and around the state converged at Burnside Park as part of the Global Climate Strike. Carrying banners, signs, and flags, these students gathered to march on the Rhode Island State House to demand that local politicians take action on climate change. 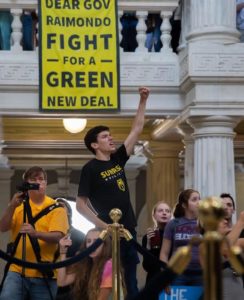 “It absolutely was worth missing school,” said Miguel Figueroa, a junior at EGHS who helped recruit students to attend the rally. “I honestly find it hard to believe that my schoolwork is more important than the fate of the planet. I would skip any day of school for a protest or direct action in a heartbeat.”

Matthew Tactacan, a senior who went to the rally, said it wasn’t about missing school for him.

“I wanted to be [part of] something bigger than myself,” said Tactacan. “Living in the ocean state and being apart of one of the most capable generations in history, I felt a real responsibility to get out there and fight for our future even though we’re only high schoolers.”

In fact, high schoolers played a major role Friday. Although Brown University students coordinated the rally, several high school students spoke at the rally, were emcees, and even acted as art/crowd marshals.

The Sunrise Movement, which Tactacan alluded to, was launched in 2017 by Varshini Prakash. At first, the movement worked to elect supporters of clean and renewable energy, but now it’s working to pass the “Green New Deal,” a set of climate change resolutions revolving around carbon sequestering and removal from the atmosphere, new jobs, and sustainable development.

In addition to promoting the GND, part of Friday’s strike was spent attacking local politicians such as Gina Raimondo who have accepted fossil fuel money from energy companies such as National Grid.

“I think she’s done some great stuff for this state,” said Figueroa, “but she’s a particular brand of Democrat that is rapidly becoming outdated. The Green New Deal Democrats are taking over.”

While 1,000 people was a good crowd, organizers hope more will join them at the next strike.

“I mainly hope we can get more people,” said Land. “For those who can’t strike, I hope many people choose to participate in the solidarity action, whatever that is, so our influence will be seen beyond just the State House.”

Find out more about the Sunrise Movement here. To view speeches from the rally, click here.