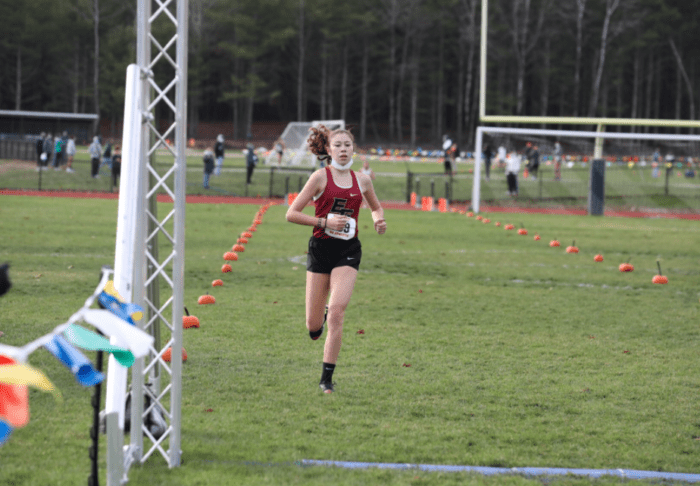 Fahys is being recognized for her cross-country speed but also for maintaining academic excellence, which puts her in the running for the Gatorade National Girls Cross Country Player of the Year to be announced later this month.

The 5-foot-8 sophomore won the state meet this past season with a time of 17:43.51, breaking the tape 15.02 seconds ahead of her next-closest competitor and leading the Avengers to a second place finish as a team. Fahys was undefeated on the season and also won the Class B Championships by 44.7 seconds. New to Rhode Island in 2020, Fahys was the 2019 New Jersey Group 3 state champion as a freshman (at Middletown South High), and qualified for the 2019 Nike Cross Nationals Final where she finished 64th.

“When my team faced East Greenwich, it became so clear not even 1,000 meters into the race that Reese was an elite-level runner,” said Carlton Bradshaw, head coach of Coventry High. “I took a shortcut to run to the 1000-meter mark to give my team splits, and she almost beat me to it.”

Fahys has maintained a weighted 3.75 GPA in the classroom. She will begin her junior year at EGHS this fall.

Matt Sylvia, a 6’2”, 195 lb. safety, has toiled in relative obscurity of D3 football (though Salve draws good crowds). Matt only saw the field three times in his 2017 debut frosh campaign but he more than made up for it his sophomore season. He registered eight interceptions, leading the country (all divisions) for most of the season and finishing in second place after being overtaken the last week of the season.

For his efforts Sylvia was rewarded with a host of post-season trophies. He was named defensive player of the week two times in the Commonwealth Coast Conference. He was picked to the first team All CCC defensive squad and the New England Football Writer’s All New England defensive team. His final selection was for third team All East as a sophomore.

Matt followed up that spectacular sophomore season with 48 tackles and 2 interceptions (teams did not throw his way) in his junior year. He was expecting bigger and better for his culminating year of competition when the Covid hit. He may play in the fall in Newport, but surprisingly, he might get a shot at further competition as there are now a host of professional leagues looking for talent. Matt is big, has good speed and plays with a nasty attitude. The CFL, XFL, Alliance Football League, Spring Pro League, Fan Controlled League and Arena football could all be possible landing spots for the East Greenwich lad. Playing for pizza in Italy or for any of the over 100 teams in Europe, who also play American football, is another chance.