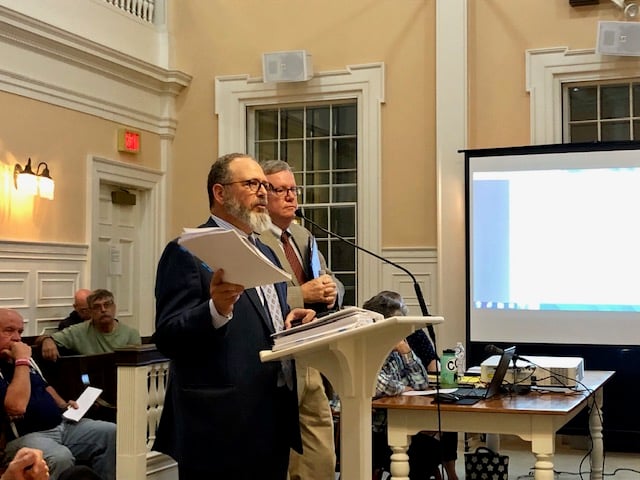 Above: Jeff Gladstone, lawyer for Blu on the Water, argues he needs more time to outline his complaints about the noise study.

The Town Council took up the issue of noise on the waterfront last night, with a decision at the start of the discussion to continue the first reading on a revised noise ordinance until Sept. 23, followed by a report out from the town’s sound consultant.

Blu on the Water lawyer Jeff Gladstone, however, decried the council’s decision to even consider revisions to the town’s noise ordinance so soon after the report was issued.

The Town Council, however, actually opened the first reading on the noise ordinance last March, with a proposal to drop the decibel level from a high of 75 to 50. But the council hit the pause button after strong reaction from both the business owners and patrons, deciding to conduct a study of the noise on Water Street. In May, having hired James Miller to conduct the study but with his work still ahead of him, the council continued the first reading again. By then, the restaurant owners (Blu and Finn’s mainly) were talking with town officials and residents and tensions had fallen considerably.

Both establishments took steps over the summer to mitigate the sounds coming from the live bands that play in tent-enclosed spaces next to their fixed buildings. Councilors Renu Englehart and Caryn Corenthal noted that Blu, in particular, had made some positive accommodations, including regarding car traffic (in addition to noise complaints, residents last spring said traffic conditions and drunk patrons were also nuisances). Finn’s, too, has added noise-dampening material to its tent. 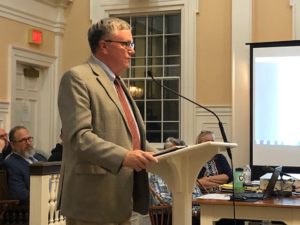 In his comments, Miller noted the East Greenwich waterfront area was “an amazingly complicated environment,” noting the train trestle, other area buildings, and waterfront atmospheric variations.

Miller’s readings – with several instances of noise levels in the 70 to 80 decibel range – took place during the first half of July. It’s unclear if those readings would be the same today, following Blu and Finn’s accommodations.

Still, as Councilman Mike Zarrella pointed out, the decibel level that matters is the number at the property’s edge. If there’s enough sound-muffling mitigation, what would measure 80 decibels in the tent could possibly measure lower at the property line.

In his report, citing the annoyance to residents of decibel levels in excess of 65 percent, Miller recommended the town lower the decibel level to 65 at some point during the evening. That would be a return to the town’s decibel limit until a change to 75 decibels in 2014.

Town Manager Andrew Nota, at his first Town Council meeting in that position, also weighed in.

“You conclude that all of the residents of the waterfront are affected by amplified sound,” he said to Miller. “The council needs to find some balance [between residents and business owners]. Maybe you could differentiate the quantifiable and the subjective to help the council exercise some discretion as to where that number should be.”

Miller agreed to provide more information from area residents (his sample size had been six residents). The council also asked for better comparisons with other RI communities. East Greenwich is the only community in the West Bay with a 75-decibel limit. Other communities have lower limits.

But Miller said he was sympathetic to the Water Street business owners.

“This is a very complicated acoustic environment. The ambient noise levels are all over the place,” he said. That said, he defended his measurements, something Gladstone had intimated were suspect. “The levels are very reliable. They are calibrated…. I feel very confident in the data. I really do.”

Gladstone continued to press, expressing concern that he would only be able to address the council that evening, if they were going to go ahead and draft an ordinance before the next meeting.

“It becomes adversarial when you say you’re going to have a first reading of an ordinance when you haven’t even looked at the relevant data sets,” Gladstone said. “How can you have an ordinance drafted even for consideration before you’ve finished that?”

Town Solicitor Andy Teitz said a first reading was little more than a public notice that something was happening. He noted that many towns do not have EG’s extended ordinance process. The second reading is a public hearing. The third reading – one many other communities skip, he said – is there to make sure they’ve done everything right.

While the process at its fastest takes a minimum of three meetings, it can be continued at any point, just as first reading has been in this instance.

Gladstone was not persuaded.

“If this is the only time that I get to speak before the legislation is drafted, then I believe this is a pretty important time,” he said, arguing for more time to address the council. Teitz encouraged Gladstone to put his complaints in writing and submit them to the town. 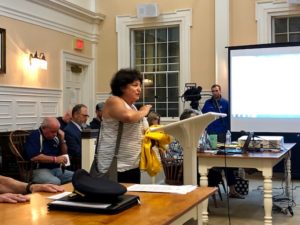 Claudia Saul has lived on Water Street for 25 years. She said she liked the restaurants but that the top decibel level should be decreased.

“The decibel level was raised five years ago and it never should have been. I know this is frustrating,” she said. “I love Blu. I go to Blu. I go to Finn’s.”

But, she said, “the prior owners never exceeded 65 decibels and they were highly successful.”

In reference to Miller’s 80 decibel readings at noon or 6 p.m., Saul said, “Those are life sounds. Constant music is different.”

The Town Council will take up the first reading of a revised noise ordinance at its next meeting, Monday, Sept. 23, and the public hearing for the noise ordinance was set for Thursday, Oct. 24, to be held at the larger Swift Community Center.

Like the news you get here on East Greenwich News? Consider supporting it by making a donation! We are a tax exempt 501(c)(3) organization dedicated to keeping East Greenwich a well-informed community. Click on the Donate button below or send a check to EG News, 18 Prospect St., East Greenwich, RI 02818. Thanks!