Cut Nurses? Librarians? ’No Options Are Pleasant’ On School Budget 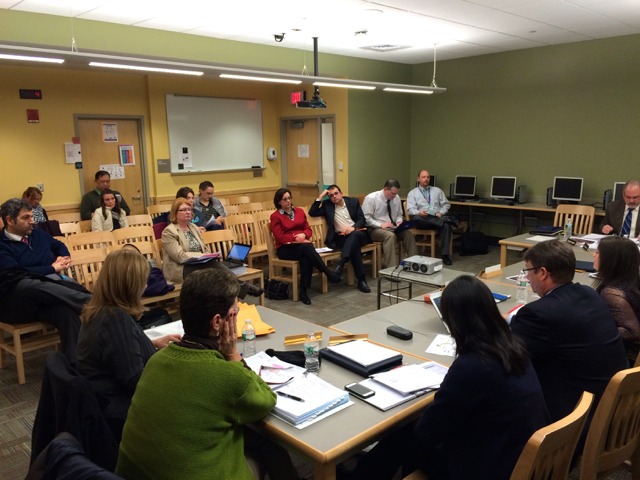 What might it take to be able to present a budget with an acceptable increase to the Town Council? Two nurses, two library/media specialists, the senior project coordinator, a raft of capital improvements, and no 1:1 Chromebook implementation at Cole, according to the list of proposed reductions Supt. Victor Mercurio presented to the School Committee Tuesday during its public hearing on the 2016 fiscal year budget.

“None of these options are pleasant ones,” he admitted.

That “acceptable” increase would be 2.5 percent over this year’s budget.

The actual $37.5 million budget presented to the School Committee last month, however, was 5.4 percent higher. So the committee asked Mercurio to come back with cuts.

“The last couple years … it wasn’t that hard to get to the number we needed to get to,” said School Committee Chairwoman Carolyn Mark, elected in 2012, after the meeting. “The Town Council was fine with the number we presented. We had to make a compelling case for why the budget was higher, but at the end of the day, we came in with a decent number, the Town Council was supportive and we were able to get it done. We did not have the same kinds of fiscal constraints in the last couple of years that we’re facing now, between health care costs and the population growth in the district.”

Mark likened this stage of the budget process to what a doctor might ask when you tell him about a headache: “On a scale of 1 to 10, how much does it hurt?” What do these cuts mean in those terms, she asked.

“For me personally, taking a nurse out of the school, when they are also delivering instruction, that’s a major red-flag to me because it’s just going to the heart of student safety,” said Mark.

Currently, each school in the district has its own library/media specialist and its own school nurse. Under the reductions presented Tuesday night, four schools would share two nurses and two librarians.

Mark questioned Mercurio on the proposed $176,000 in capital improvements, also on the cut list.

“How painful are all these, to delay them?” she asked.

“The day you make the decision to cut it is not painful,” said Mercurio. “But … if we keep doing this, the people sitting here 25 years from now will say, ‘What were they thinking?’”

Three parents at the meeting spoke in favor of adding all-day kindergarten.

Mark and Committeeman Michael Fain both expressed surprise that few of the proposed $431,000 in discretionary increases to the 2016 budget were on the cut list outlined Tuesday. Mark asked Mercurio and the other administrators to look at those items again.

“There’s no question that you guys have a really tough job,” said Tricia Colgan, mother of one alum and an EGHS junior. “We have a well-oiled machine here … I hate to see you cutting existing programs.”

In the end, all six School Committee members in attendance Tuesday night (Deidre Gifford was absent) agreed they were willing to ask the Town Council for larger increase than last year – 3 to 3.5 percent – and that staff cuts should be avoided as much as possible.

In addition, Fain, Mark, committee members Yan Sun and David Osborne all said they would like to see at least the cheapest of the all-day kindergarten proposals included in that budget. That would be the so-called “equity” proposal, which would add one all-day K class at Frenchtown to mirror what’s offered already at Meadowbrook. The price for that would be $144,000.

“The ‘equity’ model gets our foot in the door,” said Osborne.

Even while arguing to include the equity model, Mark remained ambivalent in comments after the meeting.

The administration will be hard pressed to include it, she said, “without digging even deeper into programs, so they’re quite reluctant to do that, to eliminate existing programs to make way for a new program is a very challenging thing. It takes years to build up quality programs and it can take years to get them back.”

Still, she added, “At the same time, there’s a sense of urgency around trying to move forward on all-day kindergarten.”

“We should try,” agreed Sun.

The School Committee meets again March 10. They have until March 15 to approve a budget to send to the Town Council.