Council Votes to Give Additional $263,000 to Schools This story has been updated since it was first posted.

The Town Council voted 5-0 Monday night to give the schools $263,000 in supplemental funding, $433,000 less than the School Committee asked for based on results of a performance audit it had done, but what several Town Council members called a “show of good faith” in the face of the town’s continued financial uncertainty.

The council will revisit the School Committee’s request on Jan. 28, after it gets a report on current year budget projections. Finance and administrative consultant Mike D’Amico presented an unaudited picture of fiscal year 2018 Monday night; an analysis of FY2019 was in process.

“I’m delighted they took action tonight,” said School Committee Chairwoman Carolyn Mark. But, she added, “we would have appreciated the full amount requested [$696,000].” That said, she added, “even without the information they wanted, they were willing to take action on part of our request and we’re appreciative of that.”

Supt. Victor Mercurio presented the $696,000 request Monday night, breaking it down into areas that directly affect students (including adding a school psychologist; providing additional curriculum-focused professional development, and three IT positions) for a total of $263,000, and another $433,000 for maintenance and facilities. The presentation included other district needs, which some found confusing. Find that presentation here: Schools request for supplemental funding. 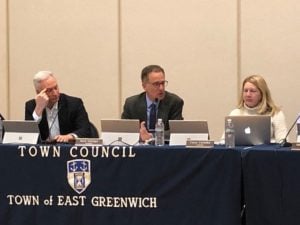 The Town Council’s “good faith” vote was both to give the schools what each council member said they believed the schools needed but also an effort to sway the School Committee before its vote planned for Tuesday morning on a potential lawsuit against the town for failing to fund the schools properly.

Although it was a unanimous vote, Council President Mark Schwager was not in favor until the outcome was inevitable. He said his reluctance wasn’t about funding the schools, but rather about the timing. He wanted to hear a report on current year spending before voting and that isn’t going to happen until Jan. 28.

“I would have preferred to wait until the 2019 numbers were known, but I wanted to be part of a good faith effort to support the schools,” he said after the meeting. At the time of the vote, Schwager said he didn’t want to be part of another 4-1 vote, referencing his frequent lone-vote status on the 2016-18 Town Council. His words elicited laughter from both the elected officials and the 25 or so people left in the audience at 11 p.m. at night.

Again and again Monday night, council members said they thought the schools had been underfunded and that they wanted to give the schools more money. The main question was timing.

Councilman Mike Donegan made the argument that the mid-year request hurt both the town and the schools, particularly if the extra money came out of the town’s already diminished fund balance, risking a lower bond rating. If the schools want to capture state reimbursement funds for capital projects, he said – bonded money with a portion reimbursed by the state – that lower bond rating would cost the town more.

“You’re in a tough spot. We’re in a tough spot,” said Committee member Jeff Dronzek, chair of the school finance subcommittee. “I respectfully ask you guys give us something to go on. Why not give us some portion of this tonight…. You can always give us more in two weeks. Dr. Mercurio could really get going on spending that money now.”

“This whole conversation is about our need to gain traction,” said Chairwoman Mark. “If we wait until the next year, then we’ve really lost ground.”

Suing the town under a Caruolo Action is all about expediency. The longer the process plays out, said schools lawyer Matt Oliverio, the less compelling the schools’ argument that they need the money this year. Under that scenario, even a two-week wait hurts the School Committee’s cause. Is $263,000 all the extra money the schools will get? Council President Mark Schwager said he didn’t know.

“There’s an ability to consider more” at the Jan. 28 meeting, he said.