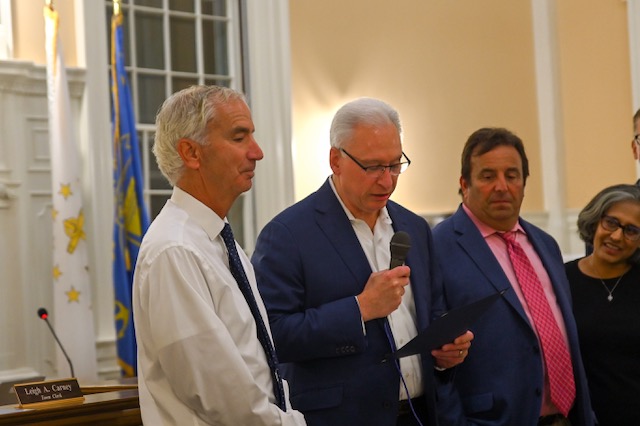 The Town Council Sept. 28 closed the door on a $396,380 payment to the town left over from the $52 million school bond approved by voters in 2008 for the new Cole Middle School and other school projects. The town had fronted that money, according to Town Manager Andy Nota, and never been paid back, so it sat on the books for a few years.

The council voted 4-0 (Caryn Corenthal was absent) to pay the town back by issuing a bond, which was possible because the town never bonded the full $52 million; it bonded $48.4 million.

“We just issued the $396,680 to pay the town back because the town had fronted it. We just finally reconciled that,” said Nota this week. “The funding was all spent appropriately but by the time the dust settled in the finance office and was reconciled, an additional amount of money needed to be issued and it hadn’t been.”

This comes as the town and schools are in the early stages of planning a new, even larger school building project (read more HERE), and the amount of debt the town can safely assume will be an important part of that discussion.

The Town Council also honored Don Bowen Wednesday night, voting to name the Eldredge basketball courts on Cliff Street – which will be getting a complete rebuild – in his honor. Bowen has been a school and town basketball coach in East Greenwich for decades and was star of the EGHS basketball team in the early 1970s, leading the team to state championships in 1971 (the school’s first ever) and 1972. As a coach at EGHS, his teams won the state championship in 1991 and 2018. In 2021, the National High School Basketball Coaches Association awarded him the John Wooden Legacy Award.

Councilor Mike Donegan said naming the Eldredge courts after Bowen was particularly appropriate since he has spent decades running youth summer leagues there. 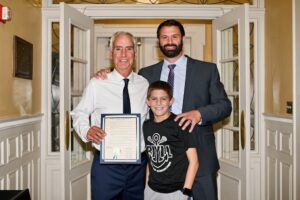 “Donnie represents the best of East Greenwich on and off the court,” said EGBA president-elect Dan Forbes. “He was a one-person East Greenwich Basketball Association prior to the EGBA’s formation.”

Forbes himself was taught by Bowen and was a member of the 1991 EGHS team that won the state title under Bowen’s leadership.

“For almost half a century, he’s developed our children’s basketball skills, with much of that work taking place at Eldredge courts,” Forbes said. “Donnie embodied athletic excellence as a player and now acts as an exemplary role model as a coach and mentor for EG kids.”

At the Sept. 28 meeting, Bowen thanked the community and his wife, Wendy, for her support. Don Bowen with his wife Wendy.

He recalled the pride he felt when Forbes told him some years ago that he hoped Bowen would still be coaching by the time his own children were of age to play so they could have the same experience he’d had.

Forbes’s son Matthew, a 5th grader at Hanaford – with his father at the meeting – has indeed been able to play for Bowen. Construction on the basketball courts is expected to take place in 2023.

During public comment at the beginning of the meeting, former School Committee Chair Jean Ann Guliano said she was hoping the Town Council would approve putting a bond referendum before voters to compensate three residents of Sarah’s Trace who have long argued their homes were damaged during the construction of the new Cole Middle School 12 years ago.

“… the Town Council and School Committee came together and completed a successful middle school project benefitting the entire town. Unfortunately, three families suffered,” she said. “After over 10 years, these families have still not been compensated for damages done to their homes. This is not who we are as a town.”

The homeowners, Susan and Chris Lamendola, Keith and Wendy Amelotte and Tom Hogan and Cynthia Pelosi, sued the town during construction and the case went to trial in 2014. The homeowners were awarded $240,000 for nuisance (the judge threw out their claim of damages). They have since argued the lawyer representing the town and schools (Chris Whitney) should not have been hired because he also represented the contractor – Gilbane Construction – in other issues. But since the homeowners were not the people who hired Whitney, they have no standing.

Because the case went to court, the matter is settled in the eyes of the town. It was, in fact, the town’s insurer that handled this claim, not the town directly.

But, for Guliano, with the town considering a new school bond project, the time seemed right to suggest that taxpayers should help these homeowners. She said the town could even use the bonds never issued from the original $52 million referendum (see above). And she encouraged the town and schools to make sure they survey all buildings within a certain radius of any new municipal construction before any shovels go into the ground.