Cole Students Take to Stage in ‘Crazy for You’ 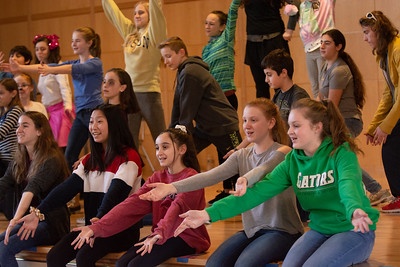 By Lisa Pomeroy
The students in the Drama Club at Cole Middle School have been busy! Cole Middle School’s Drama Club will be performing “Crazy For You, Young Performers’ Edition” on March 8 and 9 at the East Greenwich High School Auditorium.
Based the award-winning 1930 musical “Girl Crazy,” this Young Performers’ Edition of Crazy for You tells the story of rich New York banker Bobby Child who goes to Deadrock, Nevada, to foreclose on Polly Baker’s rundown theater. Bobby falls for Polly, however Polly takes a dislike to him. He vows to win her over and save the theater with a cunning, hilarious scheme that will leave the audience laughing. This show is full of humor, dancing, and features iconic Gershwin songs including “I’ve Got Rhythm” and “Someone To Watch Over Me.”

More than 40 students have been rehearsing lines, vocals, and choreography since Jan. 2 to bring the show to life. An additional 20 students are participating in the crew. They have been hard at work creating props and set pieces, and learning the show so that they can help with everything backstage during the production. Other volunteers throughout the community, many whose children have long since graduated from Cole, have also been involved in set and costume creation, showcasing the importance of the arts in their lives.
There will be two performances, Friday, March 8, at 7 p.m., and Saturday, March 9, at 2 p.m. Tickets to the show can be purchased at the door or online at www.showtix4u.com for $10. Doors will open 30 minutes prior to showtime.
Lisa Pomeroy is the Cole drama advisor.