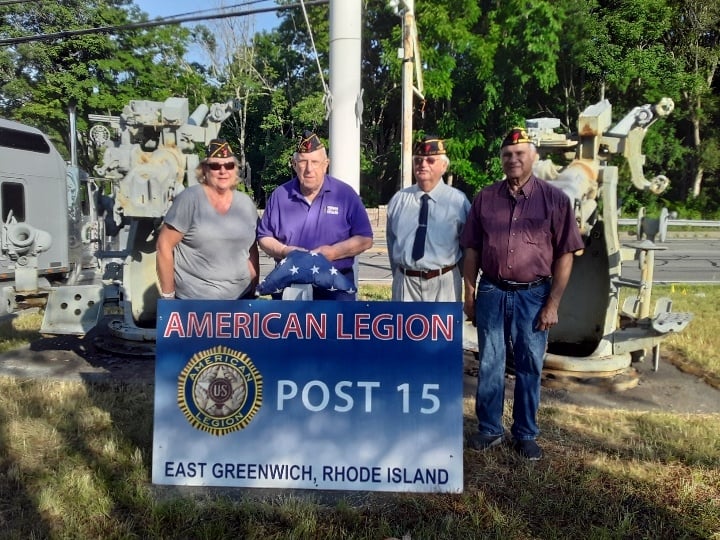 Above: American Legion Post 15 officers the day the sign and flag came down at their building at 1016 Main St. From left, Carrie Jacox, John Holmes (holding the flag), Arthur Watson, and Ray Vernon.

After more than 56 years, American Legion Post 15 is leaving its home at 1016 Main St. The two 3-inch Navy guns and the flagpole in the front of the building have been removed and most of the belongings are gone or going soon.

“It’s the end of an era,” said Post Commander John Holmes Wednesday, as a demolition company worked to free the guns from the concrete pedestals they’ve occupied since 1965, a year after Post 15 opened the building. The post, which has 180 members including several veterans of World War II, is not disbanding but belongings will go into storage, with no new location on the immediate horizon.

John Holmes and Ray Vernon at a card table that, Holmes estimated, had seen “thousands and thousands of hands” played over the years.

Holmes said they sold the property to Sathuan K. Sa, the developer who is building 38 residences on the land directly behind the Legion Hall. According to Town Planner Lisa Bourbonnais, Sa has signaled his intent to apply to build an additional 30 units on the Legion site but the town has not yet received any formal plans.

Holmes said the post decided to sell the building after they relinquished their liquor license in October, a month after patron Barbara Trojan, allegedly drunk, drove her car into another car on Frenchtown Road, causing the death of Patty Daniels and injuring others in the Daniels car. Trojan had spent several hours at the Legion before driving home in North Kingstown via Frenchtown Road. Holmes has said the Legion did nothing wrong, but Trojan’s blood alcohol level was .225 percent (the legal limit is .08 percent).

Trojan pleaded not guilty to four felony counts in January. The pandemic caused court dates to be put off; Trojan’s next court date now is Sept. 18. In May, several members of the Daniels family sued Trojan, American Legion Post 15, John Holmes and others associated with Post 15, for wrongful death.

The guns, which came from the USS Virgil, and the flagpole are being sent to the Veterans Garage in Posen, Illinois.

Holmes said one thing Post 15 is particularly proud of are the biannual visits of residents from the Veterans Home in Bristol. “We were the first in the state to have them,” Holmes said, starting in 1978. The veterans would come in December, for a holiday party complete with Santa, and near Victory Day in August, when the post would serve clam cakes, chowder, hamburgers and hotdogs. “They loved it,” said Holmes.

Post 15 will go one, he said, even if the near future remains cloudy. “There will always be a legion, as long as there are fighting men and women.”