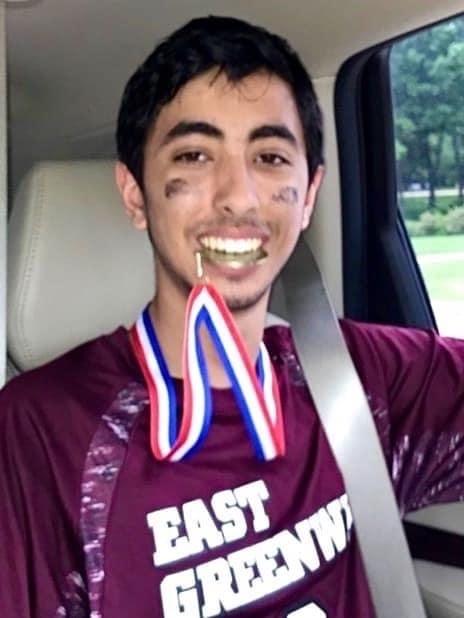 “It was definitely not how I expected to find out,” Caleb Gupta said with a wry smile. When asked about college acceptance, he said his experience overlapped with another critical moment. Two days before receiving his early-decision school’s decision, he was admitted to the hospital with a collapsed lung. On the anticipated decision day, he ultimately ended up in the operating room for surgery. “I no longer recommend procrastinating the final touches of college applications,” Caleb joked, referring to his college applications for the regular decision deadline. Luckily for Caleb, he didn’t need to worry about his regular decision essays. Once he emerged from a successful surgery, Caleb learned he had been accepted into the University of Pennsylvania.

“I don’t fully remember what happened, but all in all, it was a glass half empty and half full kind of day,” he said.

This fall, Caleb will be attending UPenn’s School of Engineering to study computer science. Strangely enough, Caleb originally was going to major in mechanical engineering until quarantine gave him an opportunity to explore other hobbies.

“I don’t think I would rather have not had these past few months because it’s been really important in figuring out who I am. It’s a lot of thinking time about everything that I really love to do and what I don’t like to do,” he said. “I’ve been coding a lot in the past two months and it made me realize I like that more than building physical things.” If not for the stay at home order, Caleb doesn’t think that he would have discovered his passion for coding and computer science. Because of this, Caleb has remained optimistic throughout these times of hardship.

Optimism and positivity have always been some of Caleb’s core traits. His charisma and friendly persona make everyone who talks with him smile, and his academic drive inspires his fellow classmates to excel. Four years ago, freshman Caleb wasn’t much different. “I’ve always been fairly friendly and outgoing,” he said. “I’m really community minded.” His extroverted personality only grew as he involved himself in more and more clubs. He participated in jazz band, chess, varsity volleyball, and student government.

“Student government was the first extracurricular that I was really involved in. That was definitely important in building my leadership. I started out as treasurer freshman year and then I became president as a junior in class council,” he said.

Caleb also established and began teaching a chess class at an elementary school in Providence when he was only in sixth grade. Since then, the program has grown into an official chess team that recently won second place in a state competition.

For Caleb, the biggest change he saw within himself during his time at the high school was focussing his interests. “In my first few years, I kinda liked everything. I didn’t know I was a STEM guy until around junior year,” Caleb reflected. “Believe it or not, I actually started off on the more English side of things.” After taking a variety of different classes, one research project specifically helped him discover his passion for engineering and STEM based careers. Ironically enough, the project was in his AP Literature class. “At the end of the year, we could do a project on anything we wanted to do, and I kind of created an inner philosophy,” said Caleb. “While I was doing the project, I did a lot of research and I discovered that the things I liked looking up were the STEM type of things.”

Another change occurred in Caleb’s approach to learning. As a freshman, Caleb had no strategy when it came to classes and GPA. He came into the high school wanting to do the best that he could in whatever classes he took, and he didn’t worry about the rest. However, freshman year wasn’t as easy as he had anticipated. “While a lot of people say it was super easy and like a breeze for them, I really struggled in keeping my grades up. I was putting in a lot of time.” As he progressed through high school, Caleb re-evaluated the type of learner he was and he changed his methods accordingly. For Caleb personally, taking copious notes and drilling facts didn’t work. In making minor adjustments to his habits, he found the most efficient ways to retain information for his style of learning. By the time he reached his senior year, Caleb found his work load to be less strenuous than it was three years prior. “For example,” he said, “Taking AP Bio this year was significantly easier than Honors Bio freshman year. My grade was significantly higher and I was putting in a lot less time.”

Caleb attributes the person he is today to EGHS’s nurturing environment. As someone who was originally in private schools, he had always believed that private schools give students an unequivocal advantage over those in public schools. After his time at the high school, however, his opinion has changed completely. “East Greenwich has tons of amazing opportunities,” he reflected, commenting on how teachers inspire students to pursue their passions. “Specific classes can foster leadership or collaboration or so many other important things that aren’t a part of the curriculum, and these skills are what have stuck with me,” he reflected. EGHS has taught Caleb not only to take pride in his academics, but to also dedicate time to enjoying life. He said, “I think it’s really important to not just stress yourself out with things that will be applicable to your real life but to also do things you’re passionate about.”

While he has always been intrinsically motivated and self driven, Caleb credits the people around him with inspiring him to venture into unknown subjects. He commented, “The things I pursued were shaped by other people. I didn’t know what I wanted to be motivated towards until I looked at what other people were doing. Having an older sister who was a senior and being able to turn to her friends and see what they were up to really helped me find the things I liked to do.” Even though it’s difficult and leads to a lot of dead ends, Caleb wishes he would have explored more as a freshman and has found that experimentation is extremely important before college. “I did explore a lot later on in high school, but I think that if I started earlier I would’ve had so much more time to develop my passions,” he reflected.

Looking to the future, Caleb hopes to be living on campus this fall, but it has yet to be confirmed. After college, Caleb wants to work with artificial intelligence or machine learning, focussing on the applications of coding and computer science in these fields. While he doesn’t have a specific plan for his trajectory, Caleb knows that he wants to keep chess and music in his life in whatever way possible.

Best of luck in the future Caleb! You will be greatly missed!

Jessica Caterson, a junior at East Greenwich High School, is editor of The Spectrum. You can find all the Class of 2020 profiles HERE.