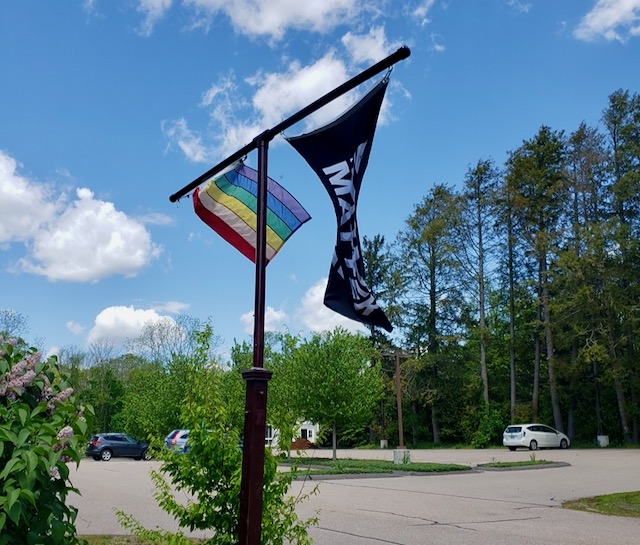 Above: The two flags before they were taken. Submitted photo

Members of the Westminster Unitarian Church on Kenyon Avenue reported their flagpole was vandalized and their rainbow and Black Lives Matters flags taken sometime late last week. According to member Jan Searles, this was the third or fourth time their BLM flag has been taken. Both flags have flown in front of the church for several years. The congregation started flying the rainbow flag more than 10 years ago, as a symbol of LGBTQ pride and acceptance. They added the Black Lives Matter flag in 2015, after a year of the congregation learning about and contemplating the role of racism in the United States, Searles explained.

While they may have had to replace the rainbow flag once over the years, the BLM flag has turned out to be more controversial. “It seems to be a trigger,” said Searles. “I don’t know why people are threatened by it.”

The parish is already at work to replace the flags and flag pole, which was snapped off. It had been mad of plastic, but they plan to use steel this time. The church is also planning on installing security cameras. The new flags should be flying by early next week.