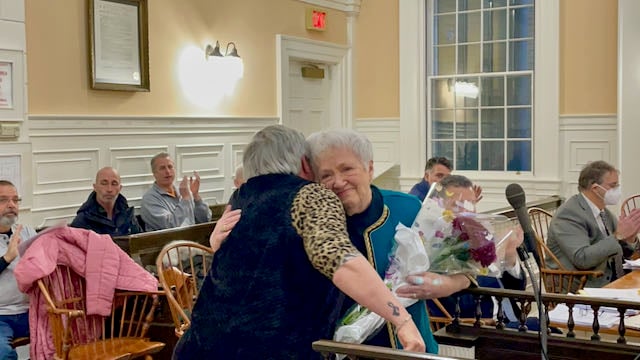 Above: Town Canvasser Elaine Vespia hugs Norrene McGeary at the Town Council meeting 3/28/22 after McGeary was recognized for her 26 years on the Board of Canvassers.

Joe Duarte is leaving the town after 22 years with the Department of Public Works, most of them as director. Duarte served as acting town manager for nearly a year, from November 2018 to August 2019, when current Town Manager Andy Nota was hired. The sitting Town Council had just been elected in November 2018 when they fired then Town Manager Gayle Corrigan; Finance Director Linda Dykeman resigned shortly after that and the town had been without a permanent fire chief for more than a year. They named Duarte acting town manager and it was under his tenure that Town Council President Mark Schwager, Vice President Mike Donegan, and councilors Caryn Corenthal, Renu Englehart and Mike Zarrella hired Fire Chief Bernie Patenaude, Finance Director Trish Sunderland, and Nota.

The Town Council praised Duarte at their March 28 meeting, thanking him for stepping in at a critical time for the town. See more in the video below (apologies for the shakiness!).

Also at the March 28 meeting, Nota announced the appointment of Bruce Lofgren as assistant town planner and the promotion of Planning Technician Aaron Lindo to the role of planning analyst. They will both report to Town Planner Lea Hitchen; the hire returns the department to three people, as it had been under Lisa Bourbonnais, who left in November.

The Town Council commended two residents for long service to a town board. Hector Vargas, who is moving to Warwick, was commended for 14 years on the East Greenwich Housing Authority. Director Tracy Johnson noted what a steady and reliable member Vargas had been over the years – see the video below.

The council also commended Norrene McGeary, who was a member of the town’s Board of Canvassers for 26 years. She joked that when she joined it was only to fill out a term for someone who had left. A representative from the Secretary of State Nellie Gorbea thanked McGeary in Gorbea’s stead. And Assistant Town Clerk Elaine Vespia offered her thanks for McGeary’s long service in helping run town elections. See the video below.