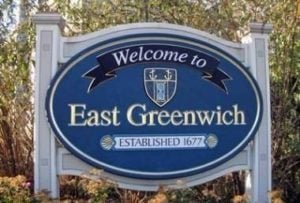 The Town Council will meet Monday, Nov. 20, in the auditorium at EGHS to vote on appointing Gayle Corrigan as town manager. Here’s the agenda.

The judge granted the town a “stay” (a pause in her ruling) that expires on Tuesday to fix that nullification. Hence the Town Council meeting on Monday. The council tried to complete this task at a meeting Nov. 14 but they failed to secure a space large enough for the number of people who showed up to attend so that meeting was cancelled just minutes after it was to begin.

Meanwhile, the agenda for Monday’s meeting lists a number of actions taken by Corrigan since June 19, but only selected actions. For instance, Corrigan’s decision to hire an Ohio consultant to present a fiscal analysis of firefighter collective bargaining agreements is not included on the agenda.

In addition, the agenda lists one item to be ratified Monday from the Oct. 23 Town Council meeting that never appeared on the Oct. 23 agenda – the approval to hire a search firm for a new fire chief.

Friday evening, Town Council President Sue Cienki sent out a letter that blamed former Town Manager Tom Coyle and former Fire Chief Russell McGillivray for everything from incorrect cost calculations to discriminatory hiring practices. She said these things were done without the knowledge of this and previous Town Councils. While she did not say explicitly that she would be voting to approve Corrigan as town manager, she did write, “I encourage my colleagues to join me in renewing our commitment….”

At least one of her colleagues, Councilman Mark Schwager, has come out against Corrigan, urging her to resign (Schwager press release).

He declined to say how he would be voting.

Meanwhile, opposition to Corrigan’s appointment continues unabated from Nov. 14, where the vast majority of attendees appeared to want council members not to appoint Corrigan. The new group Engaged EG issued what they called Part 1 of a response to Cienki’s letter (Engaged EG Cienki Response Part I), which calls into question her claim that taxes have risen “unsustainably” since 2000. [Ed. Note: The last sentence in this paragraph has been changed since the story was posted.]

The meeting will begin at 7 p.m. The EGHS auditorium holds more than 700 people and overflow can be accommodated in the cafeteria.

If you’d like to learn more about what’s been happening in East Greenwich and why, check out the East Greenwich News two-part story – find part one here and part two here.