This Was the Town That Made America Famous, Part 2 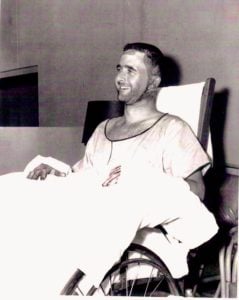 Adolph, one of the firefighters who got blown out of the Dunn house.

This is the second part of a two-part article about the East Greenwich Fire District back when it was a volunteer organization. You can find Part 1 here.

Another group of Charlie’s great photos were taken at a fire up on Kenyon Avenue near Division, where an explosion on the scene injured five firemen, including Fritz Johnson, an inductee into the EG Athletic Hall of Fame. It was a heat explosion. Gases built up inside the house and when the firefighter broke through the door the release of pressure blew all five men down the stairs of the Dunn House onto Kenyon Avenue. The only thing that saved them from being severely burned was the fact that they were wearing all their equipment and Scott air packs. They were burned in all unprotected areas and a couple spent some time in the hospital.

Remember, these men weren’t doing this for pay. They were all volunteers. They all felt it was their duty and that they were doing their community a service. That service could have cost them their lives. EG had a reputation as one of the most finely trained volunteer groups anywhere, and, under the direction of Chief Fred Miller (you can read about him here), they took pride in their ability to fight fires and answer any rescue call for help. They did it in a professional way and found satisfaction in the doing. Most, I guess, never gave a lot of consideration to the danger, or, if they did, they hid it well. The service opened up a window on a lot of pain and suffering but, outwardly at least, most firefighters appeared unaffected.

Of course, there were other perks, too, of being a volunteer. Most got a uniform and got to march in the local parades. Musters and Firemen’s Olympic-type competitions were fun get togethers where firefighting skills, competition and camaraderie were the bonding and binding things of young men. You also got to travel to places like Goffstown, N.H.; Newburyport, Mass.; and Marblehead and a lot of other small New England towns to compete in the musters and carnival.

It gave you a chance to compare, contrast and compete for bragging rights. At least for a year. Many times EGVFD was the best with their pumper and the big boys pumping could send that stream “a ways” down the paper.

This edition of Rems ( Reminiscences ) was dedicated to all those devoted men of my youth. To Chief Miller, one of the most selfless men I ever knew, and Don and Frank, George and Jim, Leigh and Bill. To Joe and Dick, Harry, Bob, Elmer and Lawson. To all those firefighters who made Station One such a special place to be.

And, mostly to my father, Gaeton, gone 61 years now, the best fire truck driver ever. Perhaps, this Rems will stir up the past a little for you all. The ghosts, the stories, the memories.

The Past … “and something’s burning somewhere. Does anybody care?”

Writer’s Note: I have some pictures that go with this story and some others that were in EG Magazine. You old Townies would be interested in them. If I can get ahold of some of Charlie Booth’s gory ones, I will send them along. As soon as I get my wife to reeducate me on using the scanner I will get them out to you. I am sure you will like them.

With as much love as I can muster for you all AND In the Spirit of Crazy Horse….