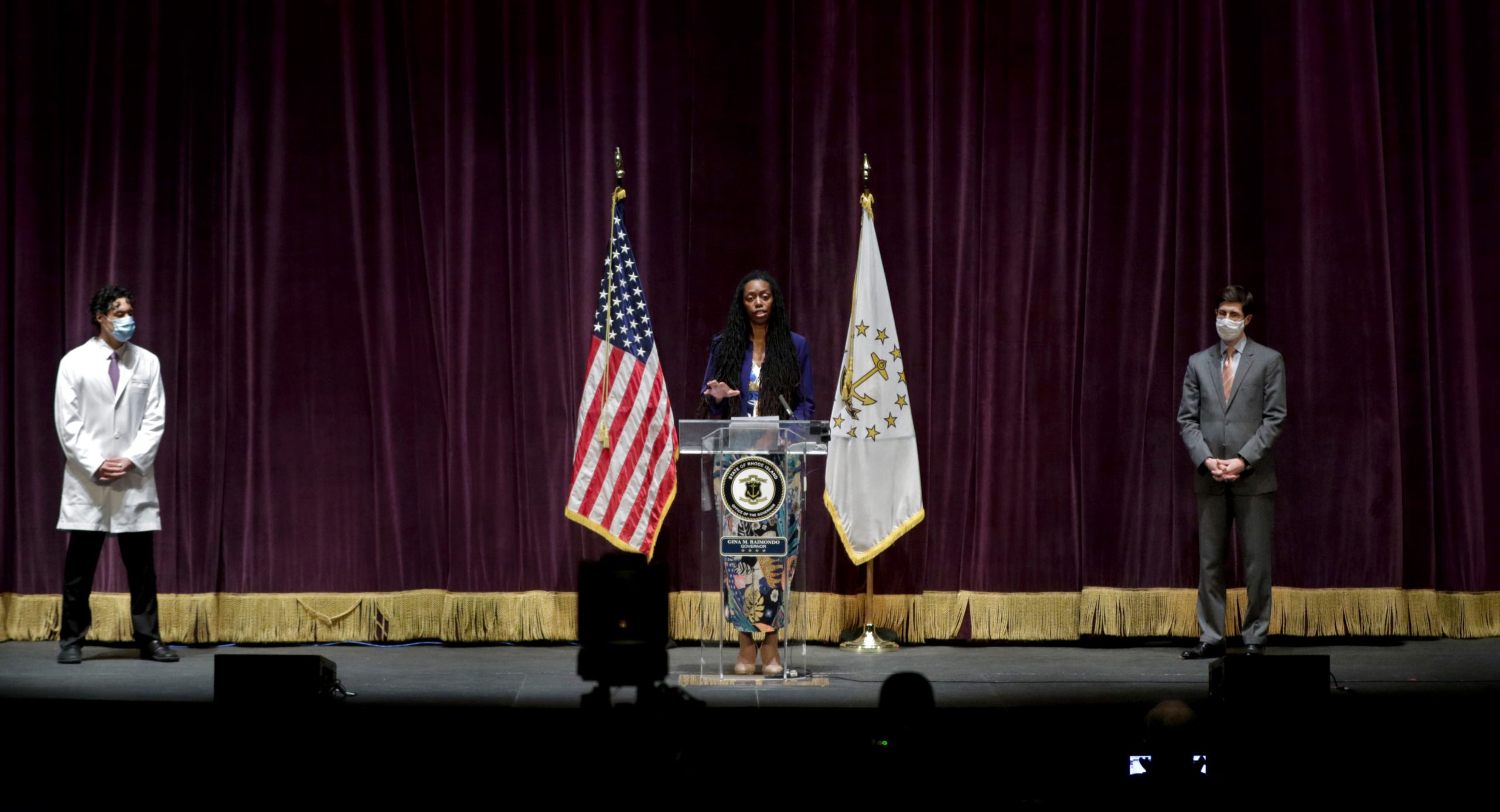 COVID-19 Data: Positive COVID-19 tests in Rhode Island have declined since last week, dropping from a 6.5 percent test-positive rate to 5 percent test-positive rate this week. The state now has a cumulative 108,786 COVID-19 cases, including 698 new cases on Jan. 20. The state reported 89 deaths this week, reaching a total of 2,076 deaths as of Jan. 21. 379 people are currently hospitalized because of the virus.

In East Greenwich, there were 95 confirmed new cases the week of Jan. 10-16. The town was only behind Woonsocket in terms of per capita cases, with Woonsocket having 701 cases per 100,000 people.Yet East Greenwich’s cases have declined last week’s 117 new cases, or 895 per 100,000 people. The town’s test-positive rate also decreased slightly from 5 percent to 4.7 percent. Find all of the state’s virus data HERE.

RIDOH Director Nicole Alexander-Scott explained that while vaccinations are imperative to end the COVID-19 pandemic, in the meantime, everyone will still have to engage in measures such as social distancing in order to curb the virus’s spread. She added that this is especially important as new, more contagious strains of the virus enter the United States.

“While the vaccine will prevent most people from getting very sick from COVID-19, and ultimately from going to the hospital or from dying, we still don’t know for certain that it will totally prevent you from actually getting the virus or from spreading coronavirus because you could still get COVID-19,” Alexander-Scott said. “Even after you’ve had the vaccine, [you may] not have any symptoms but you could still get it and potentially spread it to others. You need to continue to wear your mask, watch your distance around anyone you don’t live with, wash your hands, regularly and continue to be vigilant in the ways that we’ve talked about, even after you get vaccinated.”

Scott said that a total of 63,152 doses of vaccine have been administered in Rhode Island, with 12,515 people being fully immunized having received two doses. For comparison, last week nearly 40,000 Rhode Islanders received at least their first vaccine dose. Phillip Chan, RIDOH consulting medical director, said that the state has administered an average of 2,500 doses per day this week, up from an average of 2,200 doses per day last week.

“We are only getting very limited amounts of vaccine right now, like all other states, but we continue to be in the top tier nationally in terms of doses administered per capita,” said Alexander-Scott.

Chan said the state’s greatest challenge during the vaccination process was a lack of supply. Chan said that the state receives about 14,000 vaccine doses each week, which is enough to give a dose to 1.5 percent of the state’s population.

Currently, certain groups like frontline health care workers, public safety officials, and nursing home residents and staff are eligible for vaccination. While many people are clamoring for the vaccine, without more of it, it’s just not possible yet.

“There are roughly 187,000 people in Rhode Island who are older than 65 years of age,” Chan said. “If we were to say that all adults 65 years of age and older were eligible to get vaccinated right now, it would still take us months to get through this population, given that the 14,000 doses we are getting a week is just not enough. And that is even if we did not administer a single dose to other groups like health care providers and people that are of a higher risk.”

Chan added that there are about 65,000 health care workers in Rhode Island, but it would take months to fully vaccinate them with the current supply, even if the state chose not to vaccinate anyone else.

Next week, outpatient health care providers such as primary care doctors, pediatricians and dentists will be able to get vaccinated, according to Chan. Chan said the next groups to be vaccinated should be dialysis center workers, people involved in blood and tissue donations, funeral home workers and adults with developmental disabilities. Once that segment begins getting vaccinated, Chan said the state could move on to vaccinating adults over the age of 75.

RIDOH is also finalizing plans for the second phase of vaccinations, as all of the aforementioned groups are part of the first phase of Rhode Island’s vaccination program. Chan hopes to present the plan for this new phase next week.

When asked about a Providence Journal story that reported that trustees and board members of Care New England and Lifespan, Rhode Island’s two largest hospital groups, have been offered the vaccine before more vulnerable populations, Alexander-Scott said that RIDOH will work to ensure that frontline workers are getting the vaccine before those who are not as at risk.

This was a rare coronavirus press briefing without Gov. Gina Raimondo. Raimondo, who has been nominated by President Joe Biden for the position of U.S. Secretary of Commerce, has made few public appearances in the state since Biden’s announcement. The Senate will hold a confirmation hearing on her nomination Jan. 26. Lt. Gov. Dan McKee, who also was not at the briefing Wednesday, is poised to take over as governor when and if Raimondo is confirmed.