The outlook for East Greenwich schools wasn’t great when the R.I. Department of Education released its projections for 2020 state aid in November, with an expected drop of $460,000. It got worse under Governor Gina Raimondo’s budget released in January, dropping an additional $140,000 to $600,000.

While the formula was implemented nine years ago to bring some predictability to the process, each year has seen winners and losers. After years of being on the winning side of the funding formula (due to historical underfunding), East Greenwich is experiencing what some other communities have had to deal with, said School Committee Chairwoman Carolyn Mark at the joint Town Council-School Committee meeting Monday.

“The formula includes a core instruction amount for all students, which funds several academic components of the student’s day; a poverty factor adjustment to the core (known as the student success factor), which provides additional funding to support student needs beyond core services; and a state share ratio, which is calculated using municipal property values, median family income, and student poverty status. All data elements are recalculated annually.”

East Greenwich, with its higher-than-average property values, gets less than many other communities around the state.

As School Committee member Alyson Powell said, “What they’re looking at is our ability to raise revenue, not the actual revenue we raise.”

The General Assembly could boost state aid to communities but the state budget is settled in June – typically late June – while the School Committee must submit a budget to the town by April 15 and the Town Council must approve a budget by June 15. 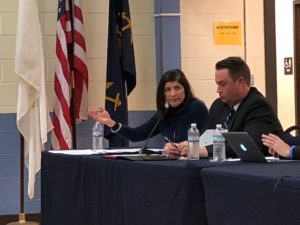 “The problem is we won’t really know where we land until after we adopt our budget,” said Mark. “This is the assumption that we have to use and all we can do is hope that we end up better than we have now.”

The state’s calculations about East Greenwich are based on numbers generated by the town (property tax rates, etc.). Councilman Michael Donegan suggested the Town Council and the School Committee consider reviewing those numbers before they are submitted to have a better sense of what the outcome will be.

Chairwoman Mark also noted that the governor’s budget calls for universal pre-K, which would be a costly addition. Though it’s unclear where that proposal will end up this year and, she said, implementation would probably be done over two or three years, much as it was handled for all-day kindergarten.

The School Committee is allowed to request up to 4 percent more than it received from the town the previous year, which would be an additional $1.4 million for 2020. If the state aid number stays where it is, that increase would drop to $800,000, supposing the schools got a full 4 percent increase, something it hasn’t seen in years.

Feeling the love for EG News? Consider making a donation! Click on the link below or mail a check to EG News, 18 Prospect St., East Greenwich, RI 02818. It really helps. Thanks!