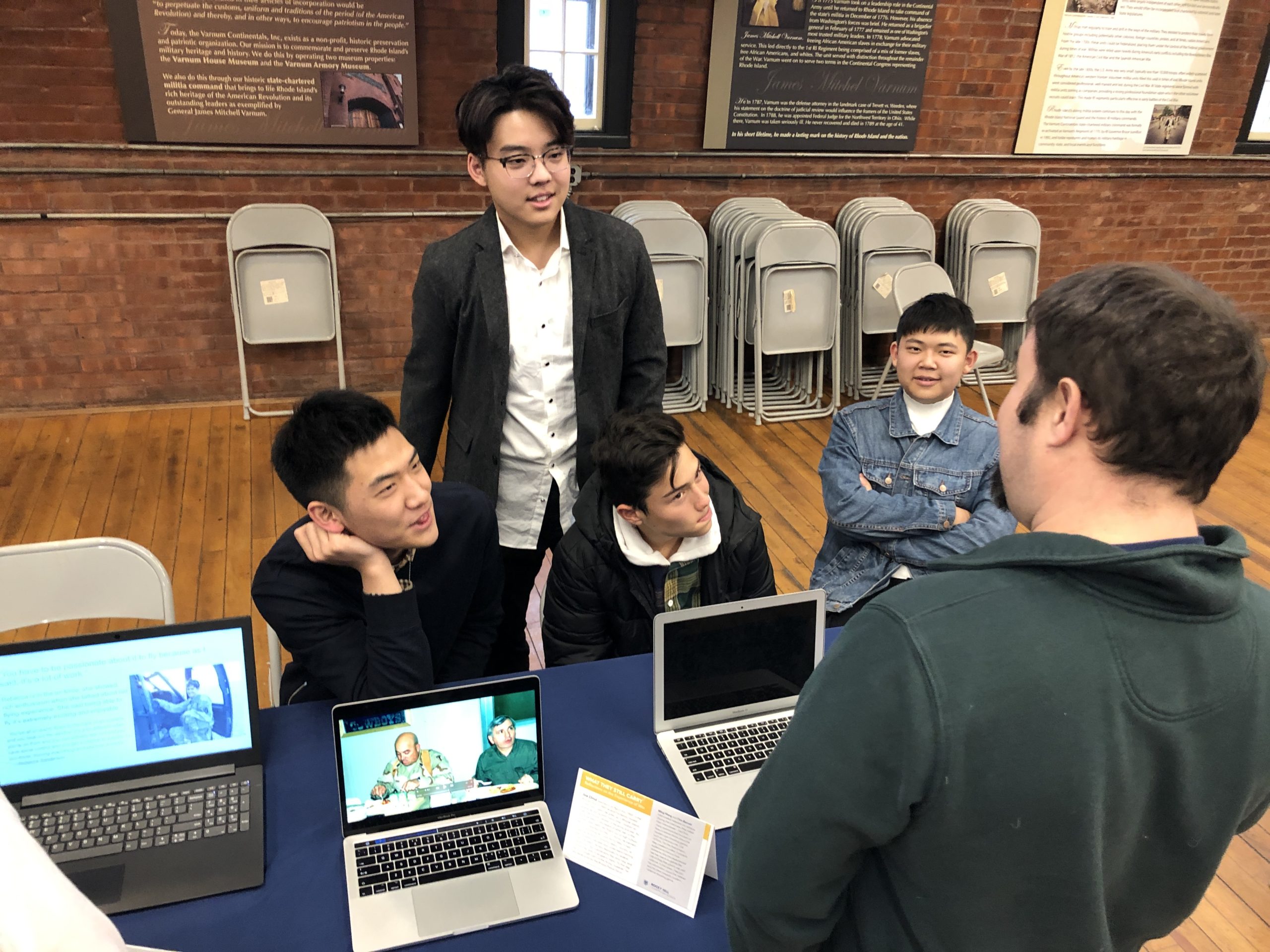 Above: Rocky Hill Country Day School students explain their project during an event at the Varnum Armory Jan. 22.

Jasper Summers and Ava Grenier-Riley, both juniors at RHCDS, explain the veterans project.

The Varnum Armory was perhaps the perfect spot for Rocky HIll Country Day School juniors last Thursday to present their interpretation of the stories they heard from U.S. military veterans. It was the culmination of a project called, “What They Still Carry: Reflections on the Experience of War.”

In that history-filled space, students, parents, veterans and assorted Rocky Hill CDS staff talked about what the students had learned.

The veterans has been in combat in Vietnam, served in humanitarian efforts in Somalia, and provided communication links with planes at the height of the Cold War, to name a few of the experiences students heard about.

English teachers Belinda (Belle) Snyman and Charlotte Buecheler had the students read The Things They Carried, the award-winning short short collection by Tim O’Brien, based on his experiences during the Vietnam War.

“The book offers such an important lesson, especially right now, to think about the military both with empathy and with critical skills,” said Buecheler. “I think that people are often all in one camp or all in the other. We need to find a balance.”

Students in groups of two or three were matched with a veteran and the conversations started there.

Students Jasper Summers and BJ Jenkins used the way O’Brien told his interconnected stories to tell the story of the veteran they interviewed, Zach Nardone, who entered the Marines out of high school just six years ago. He’s now studying at URI.

They wrote a number of short stories based on what they learned from Nardone but with a fictional twist. They then took the stories and put them all together in a small collection.

Sinead Burnett and Ava Grenier-Riley interviewed Maija Hill, who joined the Army in 1991 to help her pay for college. Based in Germany, Hill served on humanitarian missions in Bosnia-Herzegovina and Somalia.

Burnett and Grenier-Riley took Hill’s story and made a children’s book out of it.

Pages from the scrapbook Andreev and Sian made to illustrate DiLullo’s stories.

Army veteran Dottie DiLullo enjoyed her interviews with students  Stefania Andreev and Valentina Sian – “These gals are fantastic,” she said.

DiLullo was a communications technical specialist from 1959 to 1962.

“Dottie shared a lot of vignettes, moments and memories, and we thought a scrapbook would be the best way to show that,” said Andreev, “a collection of memories and stories.”

Andreev said the project hadn’t convinced her to try a career in the military: “I have my goal set on art-making, I want to go to art school.” But, she said, echoing the sentiments of other students that day, “It was really fascinating. I definitely have a lot of respect for anyone in the military.”