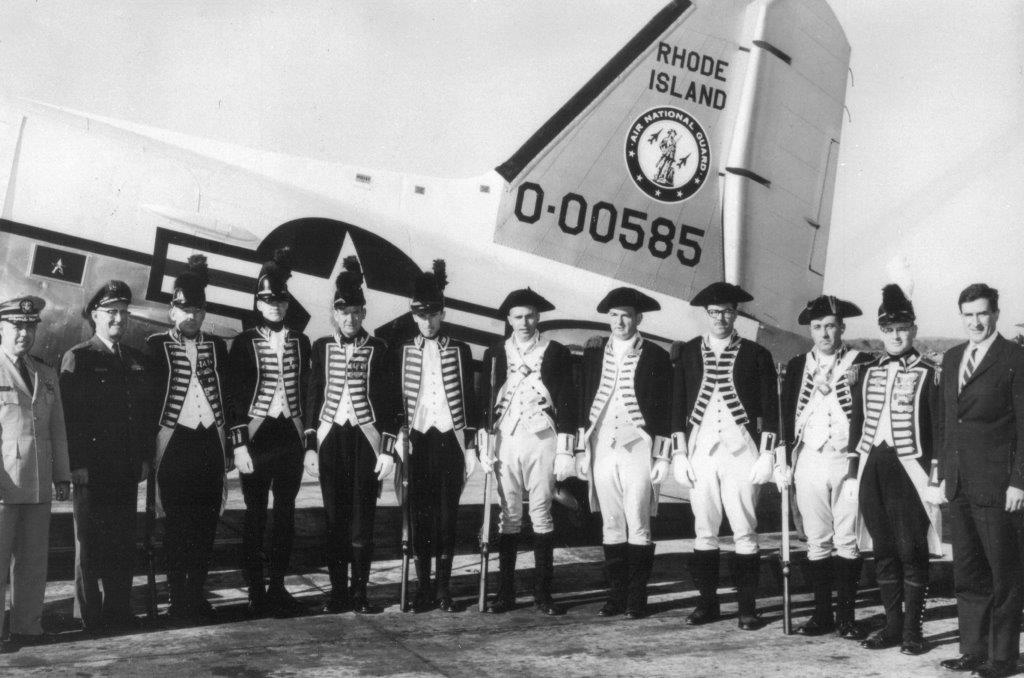 They had been invited by Chafee (a Varnum Continental himself) to present the colors at the dedication of a monument at Valley Forge to the Rhode Island men who spent a brutal winter there with Gen. George Washington.

The monument had been paid for by the Quidnessett Grange and a member asked Chafee – who lived in Potowomut – if he would come for the dedication. One thing led to another, and soon the Varnums and the Kentish Guard color guards were invited. The only problem? Everyone wanted to go. Kentish Guard Col. James Tingley, Jr., decided he would choose those members of his militia with the highest points. Pvt. Ron Sullman and Capt. Maris Mezs, both just 19 at the time, were among those with the highest points and they knew how to drill so they were chosen.

“We were told to be at the National Guard hanger on Airport Road for 8 a.m. and [Tingley] was adamant we should be ‘prompt,’” Sullman said.

“While driving between East Greenwich and Apponaug, my ’54 Ford let out one hell of a ‘squawk’ coming from the rear end and I limped into Apponaug Four Corners and spotted [Gov.] Chafee’s limousine in the parking lot of a drug store and the State Trooper driver was talking to a Warwick policeman,” Sullman recounted. “I pulled around the corner, parked and ran back to talk to Chafee’s driver and asked him if he was ‘coming or going’ to pick up the governor. He was on his way to get Chafee and when I told the driver why I was asking – that I was part of the contingent flying with the governor. I was wearing my jabot, my waistcoat and my KG breeches and the Warwick cop told me to wait a second and he radioed for permission to transport me. Upon receiving approval, I ran back to my car, grabbed my helmet, rifle, cartridge box and bayonet, put them into the police car and off we went to the National Guard hanger. I had to chuckle as J.T. [a.k.a. Col. Tingley] was pacing back and forth next to Chafee’s airplane looking like he was going to have a fit, when the police car pulled right onto the tarmac and dropped me off. What a grand entrance I made! This was my first airplane ride. When Chafee’s driver pulled up on the tarmac with Chafee, he jumped aboard and off we went. Flying over the [Warwick] City Hall, I looked down and could see my car parked on the street across from it.”

One fun part of the day was disembarking from the NG twin-prop plane (C-47, also known as a DC-3) at Willow Grove Naval Air Station and seeing the looks on the faces of the Navy personnel, Sullman said. “They never expected to see men in 18th century-styled uniforms disembark from the governor’s aircraft.”

The photo above was taken then by a Navy photographer.

The Rhode Island Pendulum ran a story about the actual the dedication in a story on the front page of the Oct. 17, 1963 edition (which ran without a photo). It began:

Gov. Chafee accompanied by special color details from the Kentish Guards, RIM, and the Varnum Continentals, attended the dedication of a monument at Valley Forge on Sunday, to honor the Rhode Island troops who encamped there with [Gen. George] Washington in the winter of 1777-1778. The monument of Westerly granite reads as follows:
Dedicated to
Brig. Gen. James Mitchell Varnum
Col. Christopher Greene
Major Gen. Nathanael Greene

And to other officers and men of the 1st and 2nd Rhode Island Regiments encamped at Valley Forge in 1777-78.

Erected by Washington County Pomona Grange No. 2 of Rhode Island

Gen. Greene and Gen. Varnum were both from East Greenwich; Col. Greene was Gen. Greene’s first cousin and came from Warwick. All were charter members of the Kentish Guards and all marched for Lexington and Concord on April 20, 1775, with the Kentish Guard.

“He reviewed the military campaigns prior to the encampment at Valley Forge and the reason why the camp was situated there. He told of the hardships endured by the troops while the British rested comfortably in nearby Philadelphia. He pointed out the emotions of the Rhode Islanders who stayed there, knowing their own state was occupied by the British and their families were in danger. He noted that this was the real turning point of the Revolutionary War, and that the training given to the troops by Baron von Stuben later proved its worth when Washington used these well trained troops against the British.”

The Rhode Island contingent was back at Willow Grove by 3 p.m. On the return flight, as the plane neared Hillsgrove, Sullman realized it would be flying right over the Mt. View section of North Kingstown, where he lived. “I remarked we were about to fly over my house and Gov. Chafee graciously got up and offered me his seat so I could get a view of my house.  I thought that was very kind of the governor.”

Only one copy of the photo was sent to the Kentish Guard and Col. Tingley had it framed and put on the wall in the armory. Sullman said he wished copies had been made for all those who made the trip and some years later, he was able to “borrow” the photo long enough to make some copies.

Mezs, who now lives in Washington State, recently shared the photo with Ron Sullman, who remains in the Guard to this day (63 years!) and, with the recent news of the Chafee homestead up for sale, they thought it might make a nice story for EG News. We agree – thanks guys!

If you have a photo and/or a good story to share about our little town, let us know (email [email protected]).