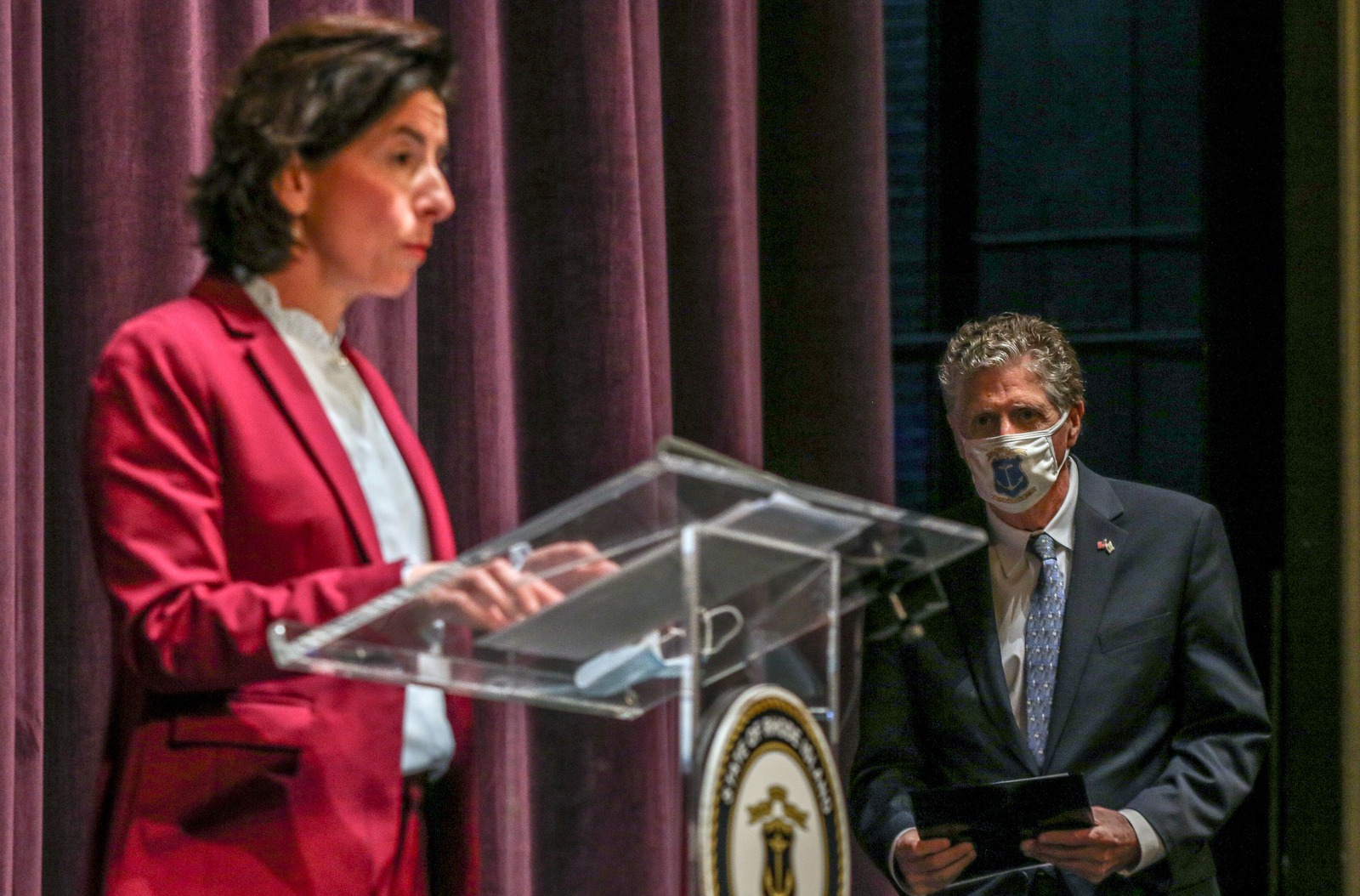 COVID-19 Data: Confirmed cases in Rhode Island saw a downward trend in the past week, to 6.6 percent from 7.4 percent last week. The state’s total COVID-19 deaths reached 1,987 Wednesday, with 402 people in the hospital because of the virus. In East Greenwich, there were 111 confirmed cases the week of Jan. 3-9. That’s up from 89 the week earlier and marks the highest number of confirmed COVID-19 cases in town to date. Find all the virus data HERE.

During a rare joint press conference with Lt. Gov. Dan McKee, Gov. Gina Raimondo said that her nomination for U.S. Secretary of Commerce and McKee taking over the governorship will not interfere with the state’s coronavirus response.

This was Raimondo’s first coronavirus news briefing in three weeks and, unusually, she refused to answer questions.

President-elect Joe Biden nominated Raimondo for the position of secretary of commerce in his new administration last week. But Raimondo insisted that she will remain devoted to her role as governor until she is confirmed.

“I will stay as the governor and continue to lead this state until the moment that I am confirmed,” Raimondo said. “I want you to know I have daily phone calls, seven days a week, with the leaders of our state’s COVID response, which I have done continuously and will do every single day until I am confirmed. I say that because I want the people of Rhode Island to know that there will be no disruption in our COVID response. We will not miss a beat, I assure you, in our vaccine planning, in our testing operation, or in any other part of the state’s response to COVID.”

Raimondo argued that her experience as governor and Rhode Island’s treasury secretary made her qualified for the position in Biden’s cabinet. She cited job training initiatives, the Rhode Island Promise Scholarship and investments in roads and bridges for creating economic growth in the state.

“We are facing dual crises: a public health crisis, and an economic crisis, unlike anything we’ve ever experienced, certainly the economic challenges ahead of us are like nothing I’ve ever experienced in my lifetime,” Raimondo said. “So when the president-elect called and asked me to serve and really lean into this work of job creation and building back better at this moment of unprecedented economic crisis and asked me to help lead through this pivotal moment in our nation’s history, I felt that I had to say yes, and it will be my great honor to serve the American people, and continue to serve the people of Rhode Island in my new role as commerce secretary should I be confirmed.”

According to Raimondo, her team and that of the lieutenant governor have been meeting frequently to prepare for McKee to become governor upon Raimondo’s departure. She also said McKee will keep the state’s current COVID-19 response team in place, and that he has begun attending COVID response meetings and briefings.

Gov. Raimondo and Lt. Gov. McKee together on the Vet’s stage to give an update on the state’s coronavirus response. Photo: David DelPoio / Providence Journal

McKee and Raimondo have had a chilly relationship while serving in their respective roles (the two positions are not joined officially – office holders do not run as a ticket). Yet McKee said Raimondo has done “a great job” leading the state during her six-year tenure.

“This is a source of pride for everyone that lives in the state of Rhode Island, to have a governor to serve in a cabinet of the President of the United States,” McKee said. “So I thank you for your service, Governor. And for me, I’m in a good spot because your staff has been … communicating with me and my office for six years. And over the last 10 months that interaction has increased. So that has put me in a good spot in a transition.”

According to Raimondo, the state saw 823 new coronavirus cases out of 16,500 tests, resulting in a 5 percent test-positive rate. She said this was an improvement compared to several weeks  ago, when the average daily test-positive rate was near 10 percent. Overall, Raimondo said that the state has administered almost 2.2 million tests since the pandemic began. More than 100,000 Rhode Islanders have been infected with COVID-19 overall, and nearly 2,000 died, according to Raimondo.

Raimondo said that current COVID-19 guidelines will be extended through at least the middle of next month, and that although the state’s numbers are improving, Rhode Islanders need to continue social distancing and wearing masks in order to curb spread of the virus.

Regarding vaccinations, Raimondo said that 30,197 people have received their first vaccination dose, while 7,446 have been fully vaccinated.

“That is fantastic news,” Raimondo said. “The fact that we’ve already vaccinated, at least initially, nearly 40,000 Rhode Islanders and we have a plan over the coming months to stay at a steady clip of vaccinating people is just a fact that you can see the light at the end of the tunnel.”

State Department of Health (RIDOH) Director Nicole Alexander-Scott later said that the state receives about 14,000 doses of the vaccine per week, and administers about 2,000 per day. Alexander-Scott reiterated the vaccination prioritization, with frontline healthcare workers, nursing home patients and staff and those over the age of 75 taking priority.

The next groups to be vaccinated will be people over 65 years old and individuals with underlying illness, according to Alexander-Scott. However, Alexander-Scott said that the state has been challenged by a limited supply of the vaccine coming from the federal government.

“The key to understand is our system is in place and ready to [vaccinate the next groups],” Alexander-Scott said. “The limiting factor is not federal rules, it’s not our approach in Rhode Island or what the systems are. The limiting factor is the amount of vaccine we are getting. Again, less than 2 percent of the population each week. What we receive, we get out. If we receive more, that’s going to allow us to really get at the populations that we want to.”

Finally, Raimondo once again urged schools to remain open for in-person learning. She said that students learn better in-person than remotely, and transmission rates at schools have remained low.

“To the school districts that continue to not let their children into the schools, particularly the youngest kids. I’m going to ask you yet again to reconsider that decision,” Raimondo said. “If you’re in Pawtucket or you’re in some places where you are denying your children, their right to an in-person education, a high quality education, particularly the youngest learners, I’m asking you, again, from the bottom of my heart to reconsider it.”

Beginning next Thursday, weekly coronavirus briefings will be led by Alexander-Scott instead of Raimondo. RIDOH will also hold separate weekly briefings focused on vaccine distribution.