Potholes Getting Filled One at a Time, Says Public Works Director 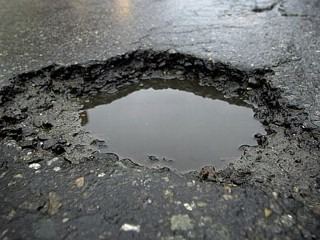 Now that it’s spring (at least according to the calendar), the town has started looking to fill potholes that have developed over our long, hard winter.

“We have a crew out there daily, fixing potholes,” said Joe Duarte, head of the town’s public works department. “We get calls, we go out, we see, we fix, we move on.”

The method used this time of year is known as “cold patch,” in which the asphalt doesn’t need to be hot. “Hot patch” asphalt is more permanent but also a lot harder to work with when filling potholes at various locations because it hardens quickly especially in the cold, leading to a lot of waste.

That makes cold patch the go-to remedy for potholes this time of year – but it isn’t the best. The fact is, cold patch doesn’t last as long as hot asphalt, which means the same potholes often come back to haunt us.

“Hot patch takes away having to go back to the same pothole over and over,” said Duarte.

He said he did include a “hot box” in his budget this year – that’s a container to hold hot patch asphalt as the pothole crew travels from one pothole to another. Hot boxes run about $3,500.

The good news in all of this is that the town roads aren’t all that bad, Duarte said. “We’re in relatively good shape” when it comes to potholes.

There are several roads in town that need repaving, but that will come this summer, with the $2 million bond money approved by voters last November.

“We have a list of roads,” said Duarte. He said they were hoping to repave 25 or more roads. “It depends on what we find when we get in there.”