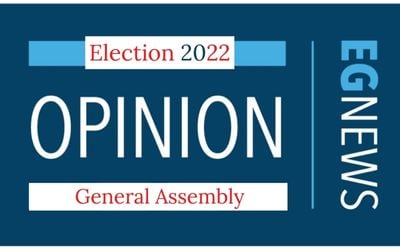 Submissions are welcome – send to [email protected] The last day to submit an opinion column (or letters to the editor) about the Nov. 8 election is Tuesday, Oct. 25, two weeks before election day (11/8).

At the recent candidate forum for the race to represent District 30, we witnessed a sad departure from the relatively peaceful and respectful tone that had characterized previous events.  On multiple occasions, moderator Elizabeth McNamara had to stop the forum to admonish an audience packed with supporters of the Amanda Blau campaign.  These Blau supporters could seemingly not contain themselves, as they hollered, interrupted the conversation, and directed jeers at our current State Representative Justine Caldwell.

The audience appeared to be particularly emboldened by a personal attack made by Blau against Rep. Caldwell, in which Blau accused Caldwell of being disrespectful to fellow lawmakers as well as to the general public in her public interactions.   In response to this personal attack, Rep. Caldwell suggested that Blau’s interest in decorum was disingenuous, especially in light of her recently campaigning with former EG Town Council President and current RI GOP Chair Sue Cienki, who infamously made the news in 2017 for threatening to castrate a town employee and subsequently feed his genitals to a dog.  Ironically, Cienki was in attendance as a Blau supporter at the forum, and took offense at hearing her own words quoted back at her. This led her to shout that Caldwell’s use of her quote was inappropriate and “classless.” Blau’s rebuttal to Caldwell was to call her reference to this 5-year-old news story “irrelevant.”

To be clear at the outset, I would like to commend Amanda Blau on running a campaign that has thus far refrained from engaging in some of the ugly vitriol that has characterized rhetoric employed by endorsed candidates of the EG GOP in recent years—as well as some of their most vocal supporters. Prior to the forum, Blau had run a largely positive and issues-oriented campaign, one that has embodied the “integrity” she used to describe it. That said, I would refute her claim that incidents like the one involving Cienki are “irrelevant,” just because they took place several years ago.  In fact, these departures from decorum remain very, very relevant, and they should be on the minds of voters as they make their decisions at the polls in November.

We are wise to remember that a large factor contributing to the Republican failure to win any town office or representation in the State House in the past 4 years has been precisely their abject failure to maintain decorum appropriate to the positions they have sought. The Cienki era saw our town plunge into controversy on numerous occasions, much of it around language and behaviors adopted by sitting Republican office holders as well as Republican candidates for office, at a time when President Trump had drastically lowered the bar for what could pass for appropriate political discourse. Rather than rejecting a Trump-like approach to communication in the public arena, these GOP-endorsed candidates wholeheartedly embraced it.

We might remember, for example, Town Council member Sean Todd’s misogynistic comments on Twitter that led to a packed house at Swift Gym speaking out in protest, an event that made widespread news. We might remember hateful and insulting language used by Town Council candidate Charles Callanan on his social media accounts, as well as statewide news stories that revealed misogynistic images and words used on the Facebook account associated with Callanan’s notorious “Broken Ankle Bar.”  When combined with a steady barrage of news stories that painted the EG GOP in a poor light, such as the violations of the Open Meetings Act by Cienki’s Town Council, nepotism in hiring with regards to Town Manager Gayle Corrigan and her friend Linda Dykeman, and Corrigan’s persistently and demonstrably false narratives about our town’s finances, the overall picture created was truly unsavory. All of this reflected unfavorably on the ethics of the EG GOP who endorsed and promoted these candidates. Yet, despite all this bad press, 2020 General Assembly candidates such as Mr. Callanan and Mr. Giarrusso steadfastly supported the town GOP leadership through all of the controversies, and vice versa. Again, I would suggest that it was precisely this mutual support that resulted in their resounding rejection by voters at the polls.

The EG electorate simply has no appetite for depravity in words and behavior coming from our elected town officials and our representatives on Smith Hill.  We are all fatigued from the constant stream of vitriol and hyperbole that has been so prevalent in our local politics in recent years.  And the sad reality is that the words and behaviors that characterized the “bad old days” did not stop when the EG GOP was decisively swept out of office in 2018.  In fact, they continue to this day. Not only is Sue Cienki actively campaigning to support our local candidates, but in fact she sets the tone for the entire RI GOP, as its sitting chair. A glance at her official Twitter account shows her associating a photo of clowns marching in the 2022 Gaspee Day parade with the text, “Glad to see Democratic leadership at the Gaspee Day parade today.” This is but one example that demonstrates that her sense of what comprises an appropriate tone or decorum has not changed whatsoever since her unceremonious departure from elected town office in 2018.  Moreover, in 2020, Cienki’s RI GOP heartily endorsed local State Senate candidate Charles Callanan. The most cursory review of Callanan’s  Twitter account reveals that he continues to this day to harass, insult, and threaten perceived political opponents such as Rep. Caldwell, and he continues to demonstrate an inappropriate tone unbecoming of one seeking public office.

By contrast, our current local town officeholders have quietly done the job of being competent stewards, listening to residents respectfully, and staying focused on making improvements on issues affecting citizens, all without landing our town in the news for all the wrong reasons.  Meanwhile, at the State House, Rep. Caldwell has demonstrated herself as a proven and respected leader in her work on adopting common sense gun laws, codifying reproductive healthcare rights, preventing MedRecycler from locating in East Greenwich, and more. Thankfully, unflattering news stories on East Greenwich politicians have become a thing of the past, and our focus has returned to the issues, where it should be. To this voter, and to many others I suspect, this has been a very welcome change, a change that undoubtedly played a significant role in the reelection of incumbents in 2020.

In recent years, we have seen candidates for local office who have promoted balance and civility, only to later demonstrate that they cared little for either. For example, in 2018, independent candidate Sean O’Leary ran on a platform of diminishing the rancor that had recently characterized our political discourse. Unfortunately, this rhetoric revealed itself to be hollow when he then openly endorsed and campaigned with Republican candidates like Andy Deutsch, Charles Callanan, or Sue Cienki, who demonstrably brought anything but civility or balance to the conversation. So far in this election cycle, this new crop of Republican candidates have conducted themselves in a civil and respectful manner, and once again, “balance” has been a primary selling point in their messaging. Remembering the lesson taught to us by the O’Leary example, we need to ensure that these candidates are being honest and upfront about their so-called “balanced” approach, and we need to know how they differ specifically from the candidates who came before them. We don’t need candidates who talk a good game about civility and decorum,  but who then, once elected, fail to back that up in their words and actions.

It is my hope that Amanda Blau would learn from the lessons of our recent history and not only distance herself from representatives of the “bad old days” of EG politics, but also to make it abundantly clear that she does not condone the type of language or behaviors used by these candidates. If she wishes to use ad hominem attack against Rep. Caldwell and throw mud at her for being “disrespectful,” she had better be sure to separate herself from those Cienki-era GOP candidates who have preceded her, who time and again have shown profound disrespect for political decorum. She needs to stand up to those in her own party who would continue to applaud these former candidates, and she needs to show us that she would adopt a very different tone at the State House than the tone we saw coming from her supporters at the forum, many of whom were the very same people who supported Cienki in the past (including Cienki herself). The pandemic may have made our memories fuzzy about things that happened before 2020, but there is one thing I can guarantee: EG voters have not forgotten the ethical failures of the EG GOP in past years, and they will not forget when they go to the polls this year.