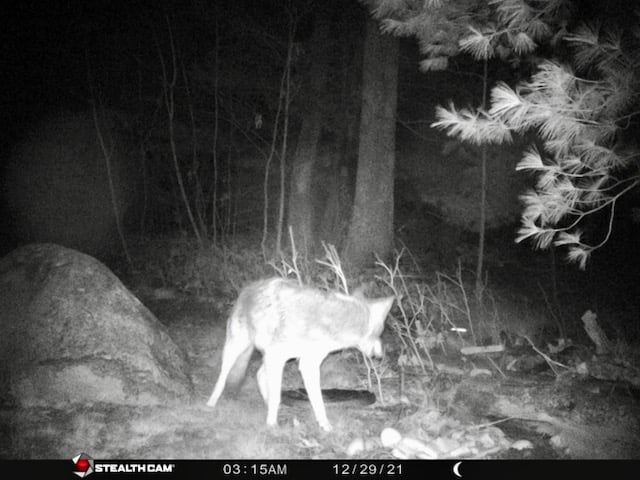 Above: A coyote in the Burnett-Testa’s backyard.

Before I tell you about my coyote mistake, I need to tell you a rat story.

A friend of mine from Connecticut said that he was surprised to see a rat in his barn. He never saw a rat in 18 years of living on his farm so he set a trap and caught it.  Then he saw another rat and did the same thing. After three weeks, he had caught 56 rats!

The rat invasion was alarming. He caught all 56 rats using spring-loaded traps, a little dangerous because sometimes the trap would go off and almost snap off one of his fingers. I told him he should have used poison, but he reminded me that if he did, the rats would die outside and that would cause the poison to reside in the food chain when other animals scavenged the body of the rat. Point taken.

After that 56th rat was trapped, they stopped coming. I like to think the rats read about how dangerous his farm was from the Police Log in their own hyperlocal, online news website. But the real story behind the sudden appearance and disappearance of the rats involved another resident of his town. A woman there had started to feed the rats outside of her house some months before rats began showing up at the farm. The rats reproduced quickly (as they do) and had lots more rats. Each generation pushed the other out away from the house until they reached his farm a mile down the road. When environmental officials stopped her from feeding the rats, the rat population declined.

Now back to coyotes. We are going to have to be able to live with them in East Greenwich. They are not going away. Even if our town eliminated a local pack of coyotes, beta coyotes or transients would move in. And any surviving female coyotes would breed at an earlier age and have bigger litters in response to any aggressive removal of a pack. 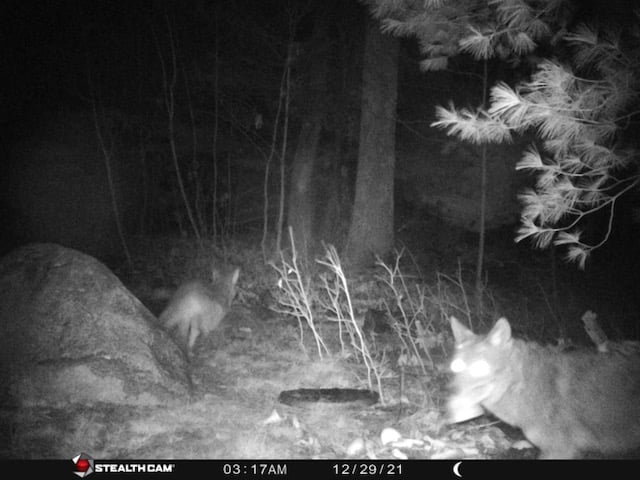 My coyote mistake was forgetting that coyotes are one of the most adaptable and opportunistic animals in our area. I was putting old fruit in my compost pile and it was not secured. My trail camera caught a couple of coyotes near my pile and although this did not lead to any negative incidents, it was unsettling to think I was causing coyotes to put my backyard on their weekly food circuit.

So in East Greenwich we should keep our garbage cans tightly closed, keep our pet food and pets inside at night, and keep compost secure by using a compost bin. If we don’t do that, we will inadvertently become that woman who fed the rats and, in turn, increase our own coyote population.

I subsequently secured my compost pile to make it inaccessible to coyotes and called a local coyote expert, Numi Mitchell from The Conservation Agency, with some questions about coyote behavior. Here’s our conversation:

What is the average number of coyotes in a pack? It sounds like 15 to 20 when they howl around the High Hawk neighborhood.

Usually 4, sometimes 5. It depends on the resources available. A less dominant coyote may be allowed to stay if there are enough resources.

If coyotes are not eating garbage or people’s food, what is their diet in the winter?

Coyotes will scavenge roadkill, especially deer or even take down a weakened deer themselves. They may take a week to eat the whole animal. In the summer coyotes will eat woodchucks, rabbit, raccoon and roadkill, but their favorite meal to eat are meadow voles.

Tell me about mating season for coyotes in Rhode Island.

Coyotes can stay together for multiple years and begin mating during November, December and January. If there is competition for food, younger coyotes of a pack will be “pushed” out of the pack.

Do coyotes aggressively defend their young, like black bears?

Coyotes do protect their pups. Usually the males will stare at people like how a parent might stare at different people when their child is at a playground.

Where do coyotes sleep at night?

Coyotes curl up in an open field in good weather. They find evergreen plants when there is snow and they only use dens for pups when the mother is nursing.  After pups are born in April, they move the dens when the fleas get bad. It’s like a shell game in how they keep their pups hidden.

How big is the territory of a coyote?

It depends on the food subsidies.  It can range from 3 to 7 square miles.

Numi also told me she knew of a coyote pack that would ignore all the animals on a farm and only hunt the meadow voles in the field.  The parents in this pack taught their pups to ignore the other animals and only to hunt the voles. It was a situation the farmer appreciated. In response, the farmer never shot a gun to scare away the coyotes because he knew these coyotes would not harm his animals.

I know it can be startling to see a coyote.  My daughter saw one pop out of the woods while walking our dog but that coyote turned around and ran back into the woods. That’s normal behavior.
If you see a coyote hanging out in your yard, HERE is a helpful short video on what to do, provided by The Conservation Agency.

One last thing: Coyotes do not howl to celebrate a kill. They howl to bring their pack together and to tell other coyotes to not enter their territory. A coyote howl is one of the most primal, haunting sounds in nature and it is one of my favorite natural events.

You can learn more about coyotes in Rhode Island at the The Conservation Agency website HERE.