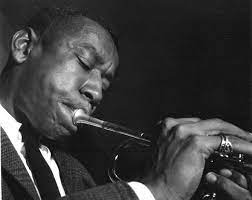 Above: The legendary Lee Morgan, who played trumpet in drummer Art Blakey’s band, The Jazz Messengers, from 1958-61, photographed by EG’s own Paul Hoeffler, who became famous for his photographs of famous jazz musicians.

When I was scanning the hundreds of photographs that were left to the Preservation Society after the Tercentenary celebration, I took the time to note the photographer’s name into the history file attached to the Photoshop picture. Clearly there was a great disparity in the quality of the photographs – most of the best photographs were taken by one of four men, alphabetically: Ennis “Cheerio” Clarke (no relation), Carl Gunderson, Paul “Bucky” Hoeffler, and Emil Stevens. While there were some good shots in the collection by others, most were by these professionals.

Stevens was the official photographer for the 250th celebration in 1927 and I lose track of him in the early 1930s. Clarke and Gunderson were Main Street studio photographers taking mostly portraits of local people but occasionally were out and about doing scenes of interest and calamity shots at least until the mid-1960s. A younger lad, lapping into their time frame was Bucky Hoeffler and while I knew personally the others except Stevens, Bucky was the one closest to my age. 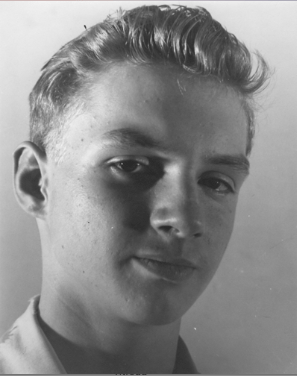 Bucky Hoeffler was born in 1937, three years my senior. As I came of age in town, Bucky and I crossed paths more often. The difference in our ages played to our interests at the time but I did take note that he was never seen without a camera, noticeably a good one. Since he was “Spencer Avenue,” he was dressed better than us street urchins but that didn’t stop him from getting down and dirty when he wanted to get a good shot. I knew him, to nod to or make a comment about the scene he was shooting, but not much more than that.

I didn’t notice at the time that the sports action photos going into the Pendulum newspaper I was helping to produce were by Bucky. I didn’t notice the accident scenes, the fires, the events so well captured were by Bucky. He got better as he aged but he always had good shots. If the writers of the stories added Bucky’s name, I credited it to him under the pictures.

I didn’t notice when he left town to go to Rochester Institute of Technology. A few years back I had a conversation with Exalted Professor Emeritus Charlie Arnold, who as an instructor at RIT had Bucky in his classes. When his name came up, Charlie told me Bucky always turned in great work assignments but seldom showed up in his classes. Despite his sporadic attendance, Bucky continued to get excellent grades for the quality of the work he turned in. Curious about Bucky’s odd lifestyle, Charlie told me that he tracked Bucky down to see why he didn’t come to class. He found that Bucky was usually up all night until the wee hours taking pictures and interviewing jazz musicians as they came to nearby venues. Apparently Bucky had to sleep during the day when his RIT classes were taking place. Nonetheless, Bucky gained his BFA in photography at Rochester and entered real life.

Here’s what Wikipedia has to say about Bucky Hoeffler:

“Paul Hoeffler (1937 – 2005) was a photographer who worked in Rochester, N.Y., New York City, and Toronto, Canada. Hoeffler is mostly known for his photographs of the American Jazz scene of the 1950s and 1960s and of Jazz icons such as Louis Armstrong, Duke Ellington, Nat King Cole, Oscar Peterson, Jimmy Smith, Count Basie, Sarah Vaughan and Billie Holiday. He also had a great passion for classical music and cultivated a close friendship with the conductor Leopold Stokowski, whom he photographed on many occasions during performances and in private.

“Paul Hoeffler gained a BFA in photography at The Rochester Institute, where he studied under the supervision of Minor White. After his graduation in 1959, Hoeffler moved to New York, where he worked as a master printer in a studio while building his career as a photographer. He later started his own studio and worked for various magazines, including fashion magazines, and took up wide commercial and artistic assignments. Prestigious record companies such as Verve, Mercury, Prestige and Blue Note commissioned Hoeffler for numerous album covers.

“He moved to Toronto, Canada in 1971, where he carried on with his passion for photographing musicians, festivals and clubs. He produced a few CDs, hosted a radio show and taught at Humber College and Ryerson University. His previous teaching experience was at the Parson’s school of Design in New York.[2]

“Many of Hoeffler’s photographs feature in the 2000 Emmy Awards-nominated documentary by Ken Burns, ‘Jazz.'”

Whenever I use a photograph in a publication, I always try to attribute it to the photographer who shot it. Copyrights aside, it’s the right thing to do. Photos come to us in a very circuitous route and often without the photographer’s name. Bucky’s pictures usually had his name stamped on the back. If I’m not sure, it’s not a hard decision to pick his shots. When I see a picture I want to use, I see if it is an 8×10 hard-paper shot – probably matte finish. I look at the quality of the tones, sharpness, and then the context of the picture, the era of the action. Then I just look at the picture itself in its totality and it tells you, yup, it’s a Bucky shot.

RIT Professor Charlie Arnold, himself no slouch in the world of photographic fine arts, was born in Providence in 1922, gained his BFA from RISD, joined US Navy in WWII and following that, had a fine arts career involving much overseas travel. He eventually settled in for a 32-year teaching position at RIT in graduate and undergraduate photography programs. Both widowed, Charlie and his childhood friend Virginia “Ginger” Bentsen, married in 2001. Ginger is a local gal, a former Pendulum staffer who continued a career with the EG Chamber of Commerce. Charlie died in 2011 at the age of 89.