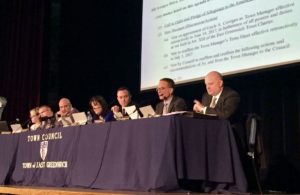 “I am going to award [lawyer Ms. Wiens] what I consider reasonable fees for the extraordinary work and effort she put into this case. I think the $300 hourly rate is reasonable…. I think the breakdown [of hours] is more than reasonable. And I would be shocked if [Town Solicitor] D’Agostino’s hours would be much different than her hours.”

The challenges in the case, and Judge McGuirl conceded those challenges, were that it is very unusual for OMA complaints to reach litigation (most are determined by the Attorney General) and that the wrongful termination part of the case overlapped with the OMA complaints.

East Greenwich firefighters argued that firefighter James Perry was fired illegally and part of that reasoning had to do with the appointment of Town Manager Gayle Corrigan (who did the firing), which McGuirl found to have been done in violation of the OMA. McGuirl rendered Corrigan’s appointment “null and void.”

Before McGuirl read her decision over the legal fees Feb. 19, lawyer for the firefighters, Elizabeth Wiens, explained to the judge that she’d lowered her hourly rate from $350 to $250. Wiens said she was hoping to avoid incurring higher legal fees with that offer. The town, however, rejected that proposal and did not offer a counterproposal.

“What did [the Town Council] think a fair number was, Mr. D’Agostino?” asked Judge McGuirl of David D’Agostino, the town solicitor for East Greenwich.

“They did not provide me with that information,” he replied.

D’Agostino argued that work for municipalities is usually billed at a lower rate. McGuirl asked how much D’Agostino got paid an hour by the town.

“The last time you came here you had a labor lawyer with you. I’m still not quite sure why. How much does he get paid from the Town?”

McGuirl was referring to lawyer Tim Cavazza, who has been representing the town on firefighter labor issues since last summer. Cavazza’s firm, Whelan, Corrente, Flanders, Kinder and Siket, was paid $104,000 for work completed through November, including nearly $17,000 for the James Perry litigation according to the invoice.

“That would be accurate, your Honor,” D’Agostino said.

But D’Agostino argued “the thrust of the Town’s argument really is that it’s difficult to ascertain” the appropriate legal fees. He added, “Initially this was a litigation that was really an employment action far and above an OMA action…. we’re suggesting that the total amount of attorney’s fee awarded in this case should be reduced to reflect the fact that, from the face of the complaint, only about one-third of the issues in the case related to OMA.”

“Did you go through a timeline for the trial itself?” asked the judge. “… because it wasn’t a third at that point.”

“No, your Honor, it wasn’t. It certainly was more,” D’Agostino said.

McGuirl said at the onset she’d thought the OMA part would be less. “Clearly that wasn’t true,” she said. “All the issues, including the firing of Mr. Perry and the employment issue, again, there was a portion related to her appointment and the Open Meetings Act. So I don’t know how you could suggest the trial itself involved a third of the Open Meeting Act.”

She questioned how D’Agostino knew that the OMA portion was only about a third of the case.

“What is that based on?” McGuirl asked. “Did you go page by page, witness by witness, exhibit by exhibit, or are you just throwing this issue out now on a memo that was prepared on Friday, since this was pending since November?”

She added, “Quite frankly, you should have been better prepared for this argument…. There is no way that the issue involving the Open Meetings Act involved one-third or, in my opinion, less that half of this trial.

After this back and forth, both sides rested and the judge proceeded to read her decision.

“I have to say this is the first case I’ve had for attorney’s fees that the parties have not been able to work it out,” she said.

McGuirl went on to say at the first conference with both attorneys, she made it clear she was only interested in the town paying for Wiens’s legal fees relating to the Open Meetings Act. She said she had been hesitant about Wiens’s original request for $350 an hour, noting ”there’s just not that many of these cases done and litigated where attorney’s fees are awarded.”

“My general sense the fees were between $250 and $300,” she said, noting that the town had not provided any affidavits as to what it thought was “a fair and reasonable fee.”

McGuirl balked at D’Agostino’s assertion Wiens’s fees were unjustified without offering any backup.

“His bland assertion at this point in time, without any factual basis, is disserving to the Court,” she said.

Ultimately, McGuirl said, “we need to look at the time and labor involved, the amount of work done, the uniqueness or difficulty in presenting the issues, obviously, legal experience involved in it, the results that were obtained, the time limits on the case, and any other issues that the Court should take into consideration.”

McGuirl said she thought the challenge of proving the OMA violations and “the willfulness of the act” would give rise to a higher than normal hourly rate.

McGuirl noted that the court and Wiens had had to deal with the fact that the town did not have meeting minutes for two of the meetings dealt with at trial, making things more difficult.

“I blame that on the Town of East Greenwich in the preparation and underlying actions, in fact, that resulted in the decision I made” against the town.

With regard to the determination of what time Wiens spent on the termination of firefighter James Perry versus the Open Meetings Act complaints, McGuirl said, “Unless it was a very clear issue, those issues in my mind were clearly interrelated during the course of the trial. One of the issues with regard to determination of Firefighter Perry, obviously, involved the authority of the Town Manager to do that, which was inherently intertwined with the Open Meetings Act and her appointment.

“I think the hours she’s related are justified…. It was a very work-intensive case. Both parties spent a lot of work and time on it,” said McGuirl. “The Town, again, is disappointed. The Court is, again, disappointed with the Town.”

She continued, “I am going to award [Ms. Wiens] what I consider reasonable fees for the extraordinary work and effort she put into this case. I think the $300 hourly rate is reasonable…. I think the breakdown [of hours] is more than reasonable. And I would be shocked if Mr. D’Agostino’s hours would be much different than her hours.”

In conclusion, McGuirl said, “Fees awarded … are more than justified, reasonable, and necessary for the services performed for the people of East Greenwich and the people in the state to make sure the Open Meetings Act of Rhode Island is complied with in East Greenwich.”

Interestingly, the establishment of awarding legal fees to the prevailing party in an OMA case derives from Tanner vs. East Greenwich, from 2005.