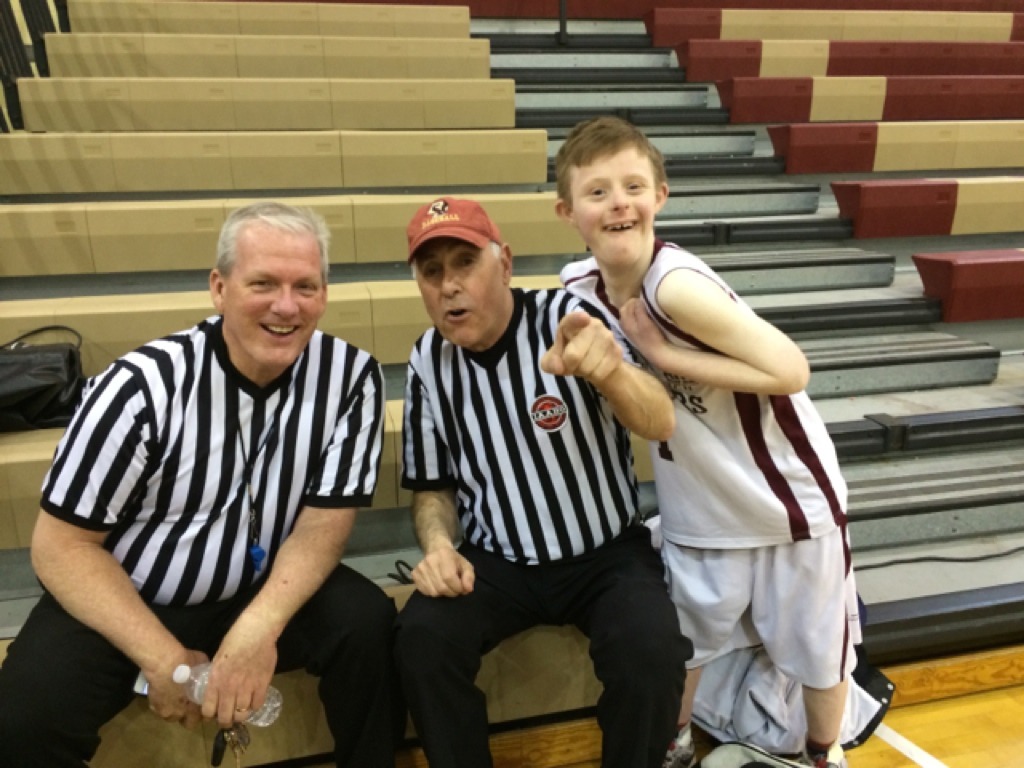 James with the refs after a Unified Basketball game at the high school this past spring.

It was 17 years ago that our youngest child, James, was born – 6 weeks early, with Down syndrome and a gap where his esophagus should have been connected.

I’d been in the hospital for nine days, after labor started early. The doctors at Women and Infants were able to stop the labor and I spent my days marveling at how suddenly your life can change. One moment I’m taking my other two children to a gymnastics class at Swift (then) gym, the next, I’m in a hospital room. That load of laundry, those dishes, those plants – never mind.

When James finally insisted in being born, he was breach and so I had a C-section, the coldest kind of delivery. Or maybe I just felt that way because, on some level, I felt I’d failed my young son, letting him be born too soon.

We’d known about the Down syndrome and that there was a problem with his esophagus, so we were not in shock the way many parents are after such birth – or were we? James was whisked away to the neonatal intensive care unit. I was sewn up and our new life together began.

James remained hospitalized for the first five and a half months of his life. When he finally came home, just three days before Christmas, he bore matching scars on either side of his upper chest, one for a surgery to clip off a valve outside his heart that refused to close two weeks after he was born and the other where they went in to repair his esophagus when he was four months old. He had a feeding tube “button” that delivered just about all his nutrition – his esophagus too tenuous – and a variety of smaller scars, marking where chest tubes or central lines had been placed.

He was home for a little over a week before he got sick and had to return to Hasbro Children’s Hospital. That was the start of the second chapter of our life with James, one where the hospital loomed ever in the background and the future, James’s future, seemed far from certain.

But time passed. Scary long nights at home, too many visits to the ER, and several-week-long stays in the pediatric ICU, began to fade.

James walked, finally, at age 4. He began school, first a preschool, where in that first year, when he was 4, he missed half the days. Then, he was at Frenchtown, where the new nurse, Bonnie, became another one of James guardian angels – he’d already accumulated several.

He got a device to help him communicate. His spoken vocabulary was, and is, extremely limited.

The pediatrician, another guardian angel, was still on speed dial, even giving us his cell number. And his esophagus would tighten and need to be stretched every few months, so we got to say hello to our friends at Hasbro. But we didn’t need to stay overnight very often anymore.

James moved to Eldredge, then Hanaford, always with Tracy Cole, the same patient and loving aide who became part of “the James team” back at Frenchtown and is with him still. At Hanaford, in Jen Foisy’s classroom, James made his first real friends. The kids in school always loved him – he’s hard not to like – but in that classroom he was part of a group.

At Cole, he became Mr. Fist Bump, and found special friends in Mr. Isibel and Mrs. Wolff, among others. The standing O at graduation nearly stopped James in his tracks (it did us). He stared out at the crowd in that steamy hot gymnasium, taking it all in, with student friends finally helping him complete the journey across the stage.

That was a year ago. Today, James has one year of high school behind him. He remains the most cheerful early morning bus rider in town. And he has made yet more new friends. He loves pools, Katy Perry, the beach, Katy Perry, playing outside, Starbucks … and Katy Perry.

This summer, he gets to see his second mother/sister/aunt/friend, Katie Gallogly, get married. He will go to Lake Placid for a family reunion. He will soon again share his room with his returning brother, Aidan, who has proved the most accommodating of roommates over the years. He will get WHATEVER food he wants from his sister Catherine, who delights in feeding this boy born without an esophagus.

And he will continue to amaze his parents, who were afraid to think very far into the future for him and delight in his happy-go-lucky nature and gap-toothed grin.

Happy birthday, James McBarron McNamara. Thanks for coming to live with us.