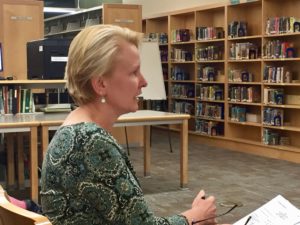 According to the lawsuit, Dykeman was recruited to work at the YMCA. At the time Dykeman was hired, now-EG Town Manager Gayle Corrigan was chairwoman of the YMCA’s board of directors. Dykeman has worked with Corrigan in Corrigan’s consulting business – including in East Greenwich; they both worked in Central Falls when it was in bankruptcy under state control in 2012.

Dykeman is suing the YMCA and O’Donnell along with Karen Cooper, who worked as chief development and marketing officer at the Y from December 2016 to February 2017. Both Dykeman and Cooper left their positions voluntarily, but they say in their lawsuit that they were “constructively and unlawfully terminated” – essentially forced to leave their jobs because of an “intimidating and hostile environment” which they say was based on their gender.

Corrigan was voted off the board of the YMCA in January 2017 in a unanimous 32-0 vote. Dykeman and Cooper left the YMCA in February.

Corrigan filed a complaint against the YMCA and O’Donnell with the state Commission for Human Rights in March 2017, saying she was retaliated against after she tried to act on O’Donnell’s harassment of Dykeman and Cooper.

In Dykeman and Cooper’s lawsuit, they say O’Donnell, former chief of the state police, treated them more harshly than he did their male colleagues and that his harassment was “severe, pervasive and constant.”

Dykeman, Cooper and Corrigan are “co-founders” of the consulting firm Lozen Associates, which opened for business in March 2017.

Here’s a link to the lawsuit: Dykeman-Cooper Lawsuit.