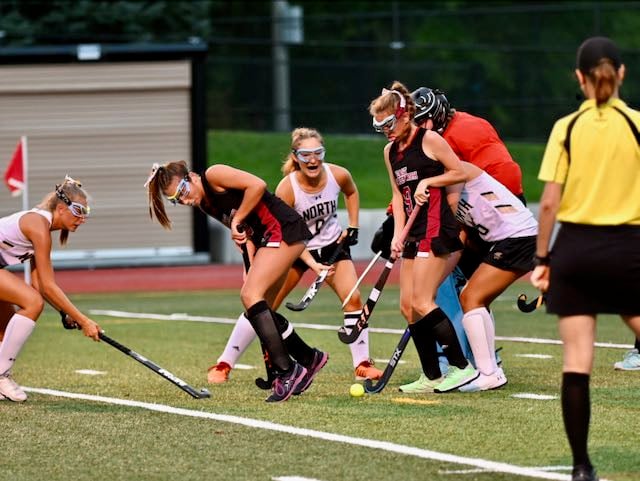 Above: Alex Mega makes a shot through her legs for a goal. Photos by Chuck Nadeau (find all Chuck’s photos at chuckn.com).

This was a game between two Division I teams but, by the play, you wouldn’t believe it, with the Avengers blanking the Skippers, 5-0.

I would say that 90 percent of the game was played in the North Kingstown end, and the shutout proves my point. The Avengers looked good. Of course senior Alex Mega, 3-time all stater, gave them a distinct advantage. Mega scored three of the five goals. One of them between her legs. Mega also had one assist.

Grace Casey had two assist and showed a lot of speed down the sideline, according to Coach Deb McMullen. Cat Neville, McMullen said, “scored a perfect goal off a corner [and] she and Gianna Salvator shut down the NK offense.”

In addition, Olivia Prior was everywhere, McMullen said, and  Maeve Kiernan scored a goal and made some amazing plays.

Keep an eye on this team as they head toward possibly a fourth state championship. Judging from this game, they have a good chance.

The next game for the Avenger girls will be at home Friday, Sept. 9, against South Kingstown. Game time is 4 p.m. The teams shake hands after the game. Maeve Kiernan bringing the ball up the line. Grace Casey heading upfield with a defender at the heels. Coach McMullen leads a team meeting before the game.

Above: URI's Green Hall. Credit: URI Photo If you or your child has made a dean’s list and you'd... Above: Ella Kauffman kicks one past the EP goal keeper. Photos by Chuck Nadeau (chuckn.com). The...