The high school fall sports season ends this weekend and East Greenwich has two teams still involved – the Girls Volleyball team will play Lincoln in the state championship on Saturday at 2:30 p.m. at Rhode Island College. And the Boys Football team meets Woonsocket, the only team it lost to during the regular season, on Sunday at noon at Cranston Stadium. This is the Avenger Football team’s first Super Bowl in Division II, but Coach John George’s fourth. 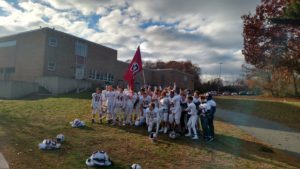 While both teams have obviously had great seasons, here are other fall sports highlights:

The Girls Cross Country team made it to New Englands for the first time in several years, with top runners Leah Chace, Brynne Shunney and Anna Caliri. Chace came in 43 out of 261 runners at New Englands.

The Boys Soccer team made it to the playoffs for the first time in a couple of years, losing in the quarterfinals.

The Field Hockey team lost in the semifinals to Barrington.

Girls Tennis lost in the semifinals to Moses Brown.

The Unified Volleyball team lost in the first round of the playoffs to Portsmouth.