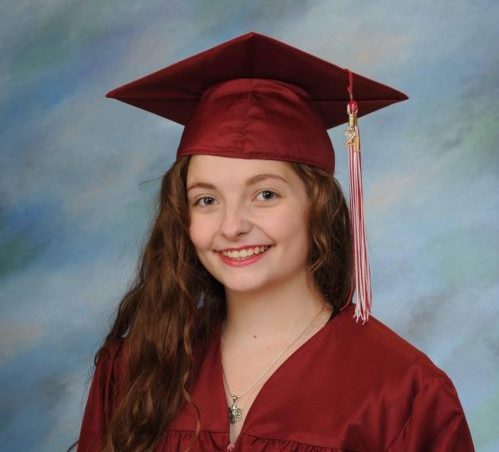 East Greenwich High School’s valedictorian didn’t step foot on the high school campus at all this year. Instead, Jordan Kalinsky was participating in a dual-enrollment program at the University of Rhode Island, where she took a full college course load that overlapped with high school credits. As such, the end of her time actually at the high school was right when the pandemic began in March.

“It was interesting because I applied to URI before the pandemic started, so I was sort of anticipating that the end of my junior year would be my farewell or senior year,” Kalinsky said. “So when we got out of school because of COVID it was strange to be cut off from everybody.”

But Kalinsky found solace in something she knew she wanted to continue for the rest of her life: writing.

“I had a lot of trouble in the beginning but I think being in my creative writing class helped me deal with it,” Kalinsky said. “I wrote a lot about my feelings because my mom’s a double lung transplant so we basically locked ourselves in our home. That was when I really turned to my writing to get everything out of my system.”

This fall, Kalinsky will move to New York City to transfer from URI to the New School. There, the valedictorian plans to pursue a joint program where she’ll earn a Bachelor’s degree in journalism and design and a Master’s degree in creative publishing and digital journalism. She said she’s looking forward to living in a city and having new experiences.

Kalinsky is involved in a wide array of progressive activism. She helped organize the Sunrise Rhode Island’s climate strike and wrote editorials in favor of gun control legislation and universal health care published on her website.

“I always really loved to write and that freshman year English course really helped me realize how much I value writing and being able to tell a story,” Kalinsky said. “If I want to make a difference, the way I can do that is by telling the stories of people who can’t themselves.”

Marc Brocato, who taught Kalinsky’s freshman English, creative writing and sports writing classes, described Kalinsky as someone who has strong conviction regarding her views and will stand up for anything she believes in. He said she has used writing to express this in many different ways.

“She’s a spectacular writer, just exquisite with the written word,” Marc Brocato, who taught Kalinsky three English courses at EGHS, said. “She has a way of probing her way through subjects with her writing. She has a gift in how she goes about writing, no matter if it’s an analysis of literature, something very formal or a creative writing piece, she nails it every time.”

While attending the high school, Kalinsky was a member of the school’s Model United Nations club and Sailing team. She said her favorite classes, other than English and creative writing, included AP biology, French and sports writing. As a URI student, she’s a member of Hillel, the Jewish student organization.

But Kalinsky’s favorite EGHS memory comes from an experience her sophomore year in which the whole grade participated in a WWI political simulation.

“Each group is a country and you rack up points and have a huge debate,” Kalinsky said. “I was one of the captains of Great Britain and we actually won the debate by forming an alliance with Russia. It was a super fun experience. I really enjoyed being in that leadership role and seeing everyone work together was awesome.”

When asked what advice she’d give current EGHS students, Kalinsky advised them to relax and enjoy the ride.

“I was a very different person when I started high school,” Kalinsky said. “I was really uptight and would freak out about exams and would cry for like an hour when I got an A-. I’d advise people not to do that because there are so many more important things in life. You’ll still get where you want to go.”